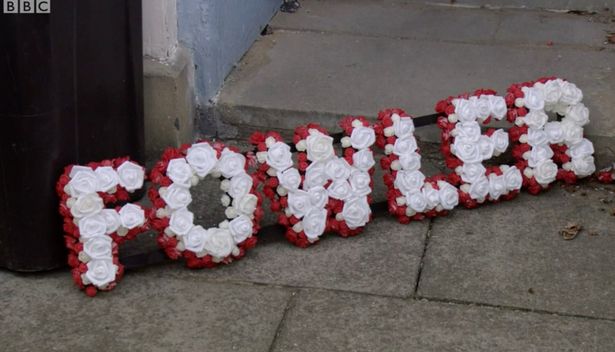 That's low, even for Ben!

Ben Mitchell stooped lower than ever last night as his vendetta against Martin Fowler continued – and EastEnders fans were repulsed by his actions.

In an attempt to threaten and unnerve his adversary, Ben sent Martin funeral flowers to the family spelling out ‘Fowler’.

Read more: EastEnders viewers saddened as Jean is told Daniel has passed away

But those watching from home slammed his actions as they came just days after Bex Fowler attempted suicide.

Viewers know that Ben is in possession of the bloody wrench that Stacey used to hit Phil over the head with, and Stacey’s fingerprints are all over it.

After attacking Phil and leaving him for dead, Martin and Stacey fled the Square – but he returned when daughter Bex tried to take her own life.

Ben covered up the crime, but has been using the wrench as leverage to blackmail Martin into doing ‘jobs’ for him, including stealing a car.

On Thursday (October 10), viewers think Ben went too far when he sent the funeral flowers to Martin as a sick warning.

One fan tweeted: “Ben sending Martin a ‘Fowler’ wreath is a tad insensitive given what happened to Bex barely a week ago ain’t it? Even for him #EastEnders.”

ben honestly that fowler wreath is not one of your finest moments aksjdjdk pic.twitter.com/OHQyFhk9X8

Ben sending that wreath was cruel but we all know ben can be nasty. There ain't no sugar coating it

Ben! Just NO! What's wrong with you? #EastEnders

Ben’s wreath stunt was cruel and unjustifiable but I like him so much I can’t bring myself to hate him for it! If Max did something like that I’d be calling for his head!

Another said: “Ben sending that wreath was cruel but we all know he can be nasty. There ain’t no sugar coating it.”

A third added: “Ben is disgusting!”

“Ben’s wreath stunt was cruel and unjustifiable,” said one more, while another seethed: “Martin should punch Ben for doing that! After what Bex has been through.”

In fact, Martin DOES lose his cool tonight (October 11) and lands a punch on Ben.

Tensions reach breaking point between Martin and Ben, when Ben once again goes back on his word…

Spoilers have indicated that the danger will only escalate between the two next week, when Martin actually gets seriously hurt as a job goes horribly wrong.

Viewers also know that Lacey Turner is set to cameo in an upcoming episode ahead of her full-time return, so it is expected that the conflict between the Slater/Fowler and the Mitchell families will intensify in the months to come.

Do you think Ben is a good villain? Leave us a comment on our Facebook page @EntertainmentDailyFix and let us know what you think!