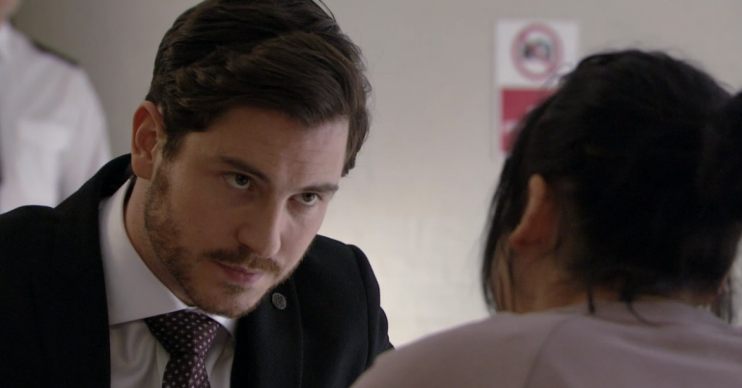 EastEnders viewers convinced Whitney and Gray will have an affair

Gray is abusive towards his wife Chantelle

Viewers of EastEnders are convinced Whitney and Gray will have an affair after spotting a hint in Friday’s episode (Friday March 6 2020).

Currently Whitney is in prison awaiting trial for the murder of Leo King, the man who had been stalking her for months.

Whilst she’s been inside, she’s been spending a lot of time with friend and neighbour Gray, who is also her lawyer.

However, some viewers think there could be more to their relationship after spotting a hint in Friday’s episode.

In the scene, Gray paid Whitney a visit before her bail hearing. During this time she thanked him for his help and for giving her a chance to tell people what really happened with Leo.

She then grabbed his hand and they shared a look, leading viewers to believe they will begin an affair.

I DO NOT LIKE THE LOOKS BETWEEN GRAY AND WHITNEY #EastEnders

Unfortunately for Gray, he was suspended from work after Whitney was refused bail.

This week, he will be left fuming when his things are sent home from work.

His wife Chantelle tries her best to support him but he warns her not to tell his family what’s happened.

But when he learns the firm have dropped Whitney’s case, he’s fuming.

Gray later takes his anger over work out on Chantelle, leading her to ask Karen to babysit so she can get the kids out of the house to safety.

Whitney and Gray gonna have an affair, can see it now.

Soon Chantelle’s dad Mitch hears Jack talking about seeing Gray going into a hotel and thinks that his son-in-law is having an affair.

So he decides to do some digging and is shocked to discover Gray has been suspended.

But later Gray lashes out at Chantelle, thinking she told her dad about him losing his job.

While she recovers at home from his attack, he is horrified to realise that Mitch worked out the truth himself.

Will Chantelle ever tell anyone about Gray’s abuse?

Do you think Whitney and GRay will have an affair? Leave us a comment on our Facebook page @EntertainmentDailyFix and let us know what you think!