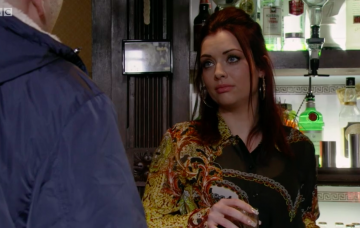 EastEnders viewers convinced Whitney Dean is going to be killed off

Apparently actress Shona hasn't been seen for a while on set...

EastEnders viewers are concerned that Whitney Dean is going to be killed off.

According to The Sun, the Walford cast have been spotted filming a funeral near the BBC One soap’s studios.

Fans are convinced that they are saying goodbye to EastEnders favourite Whitney.

Unless Whitney’s having a black themed wedding then yeah it’s probably her wedding but looked very funeral themed to us. & as for shona would of confirmed it is not all true because if worst come to worst she’s would of been asked to keep it under wraps! #EastEnders

Watching Whitney with all these rumours about her future at the moment makes me really sad. #EastEnders

Why is Whitney being mentioned so much!
JUST GOD PLEASE NO!!!!#EastEnders https://t.co/phS5jEBZ7B

To Whitney. Who’s gonna be killed off possibly in a few months #eastenders

On screen currently, Whitney is busy arranging her wedding and getting her new market stall off the ground.

During an argument with Ben Mitchell, he figured out Callum’s secret, and whilst at Callum and Whitney’s flat-warming party, Ben opened up about losing Paul.

But Callum ended up proposing to Whitney and didn’t tell her what happened between him and Ben.

This isn’t Whitney’s first wedding as she married Lee Carter in 2016. However the marriage broke down and Whitney went away for a while.

When she returned Whitney met barman Woody Woodward and the pair soon got engaged and prepared for a new life in Spain.

But it wasn’t meant to be when Whitney headed to the tube station and he was nowhere to be seen.