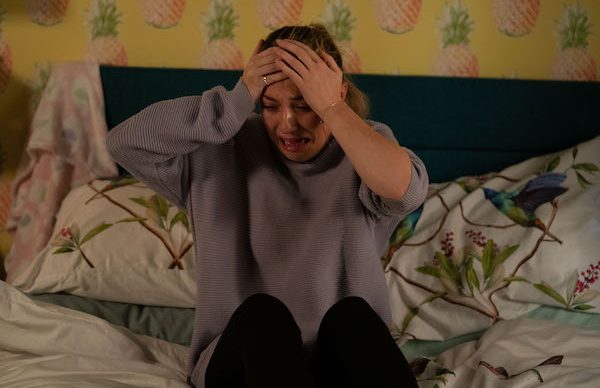 Ben Mitchell arranged for Martin to kidnap and kill Keanu, but Martin helped him escape

Viewers of EastEnders are convinced Louise Mitchell will confess to killing her ex-fiancé Keanu Taylor.

The teenager decided to set Keanu up by pretending they were going away together, but in reality, she had taken him to be kidnapped by Martin Fowler.

Assuming Keanu had been killed, Louise is starting to struggle with the guilt.

The pressure continued to pile on throughout the episode, with Louise’s mum, Lisa, knowing something wasn’t right with her daughter, and Keanu’s brother Keegan demanding to know where his brother is.

It all proved too much for Louise and she went over to Ian’s to have a go at Sharon, giving her a smack.

Later, Louise’s brother Ben and dad Phil told her they couldn’t afford to slip up and needed her to keep quiet.

However, it’s obvious she’s starting to crack as she broke down in tears.

#EastEnders My guess with Louise:
She will have a break down and go to Karen admitting everything on the basis she believes Keanu is dead, Karen will tell her the truth. Louisa, Peggy and possibly Lisa will move to the villa in Portugal, where Keanu will be waiting.

Louise has finally cracked. I knew she couldn’t cope with what she done. #EastEnders

I knew Louise would crack #EastEnders

It looks like viewers could be right as next week Louise does begin to crack.

Viewers know that although Ben got Martin to kill Keanu, he didn’t go through with it.

At an abandoned warehouse, Martin and Linda Carter faked a video of Keanu being killed before helping him escape.

Martin showed Ben the video leading the Mitchells to believe Keanu is dead.

Last week, Martin took Keanu’s mum Karen to the airport so she could say goodbye to her son.

With Louise actress Tilly Keeper leaving the soap soon, could this be the start of her exit storyline?