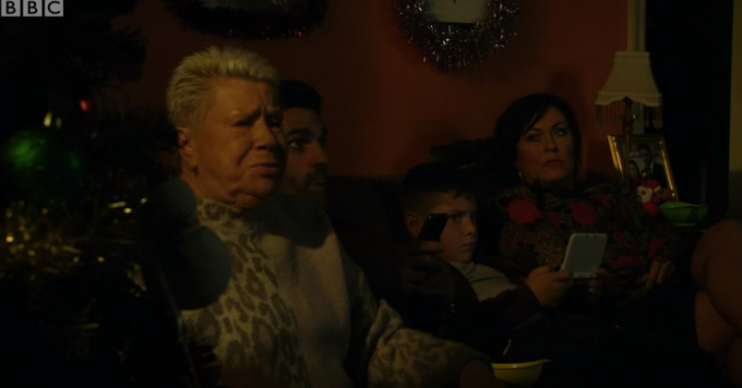 The electric at No.31 was cut out

Viewers of EastEnders were left confused as Tommy Moon’s handheld game cut out along with the Slaters electricity.

Fans of the BBC soap know the Slater family are currently at war with the Panesar brothers.

For months, Mo Harris has been hiding the fact they need to leave the house.

Recently, Kat, her boyfriend Kush and Jean were shocked to learn the house owner Janine Butcher was selling to the Panesar brothers: Kheerat, Jags and Vinny.

Realising they had young children living there, the brothers gave them till the new year to find a new home.

Tommy’s handheld would not have gone out in a power cut.

Although Kat talked Kheerat into letting them stay, he told them he’d be upping the rent.

But the Slaters weren’t having it and barricaded themselves in the house, refusing to leave and refusing to pay more than what they were already paying.

Read More: EastEnders SPOILERS: Phil goes nuts as he finds out the truth on Christmas Eve!

The Panesars soon hit back and in last night’s episode (December 23 2019) they cut the electric out at Number 31.

Whilst Kat, Kush, Kat’s son Tommy and Mo were relaxing on the sofa, the power went out.

But viewers noticed something strange.

As the power went out, so did Tommy’s handheld game – which has a rechargeable battery.

Tommy didn't save his game during the powercut so lost his progress….he has a 3DS #Eastenders

Tommy it’s not even plugged in #Eastenders

Tommy was playing a 3DS. It shouldn’t have gone off when the power went out 😂 #EastEnders

Tommy must of been playing with 1%batt #Eastenders

As the power went out, Tommy yelled: “I ain’t saved where I’m up to on my game.”

However this can be explained.

Although Tommy was playing a handheld device,  if he was playing an online game the wifi going out would’ve stopped has game.

With the Slaters having no electricity, will they eventually be forced to leave their home?