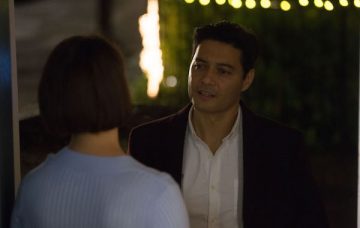 Adam is in a relationship with Honey

Viewers of BBC’s EastEnders have called out an ‘odd’ habit of dentist, Adam Bateman.

Adam first appeared last year when Honey Mitchell had a toothache and couldn’t get an appointment at the dentist.

The pair have been together for quite some time now and Honey and her children Will and Janet have recently moved into a flat with Adam.

Despite this, viewers know that Adam hasn’t been loyal to Honey and has been cheating on her with his foster-niece Habiba.

However, viewers have noticed this isn’t the only thing strange about Adam.

He has a habit of calling Honey by her real name – Susan – when she prefers to be called Honey.

In a Digital spy forum called “EE Honey and Adam” a viewer wrote: “Sorry if this has been mentioned before but can anyone tell me why Adam refers to Honey as Susan and no one else does? Why has no one commented on it?”

One user responded with: “Because before they were together he was her dentist, so she would have been introduced to him as Susan. He probably calls her that out of habit.”

Another put: “Also it would be a bit weird him calling her Honey when he is a dentist. If you know what I mean.”

The original user asked: “What has that got to do with it? He publicly calls her Susan and no one thinks it’s odd.”

Another user wrote: “I think it’s all to do with control, he’s trying to make Honey more upper class so he calls her Susan rather than a nickname.”

Another added to that comment: “I think it is that.”

A second said: “Exactly, look at how he corrects Honey all the time. Everything has to be perfect.”