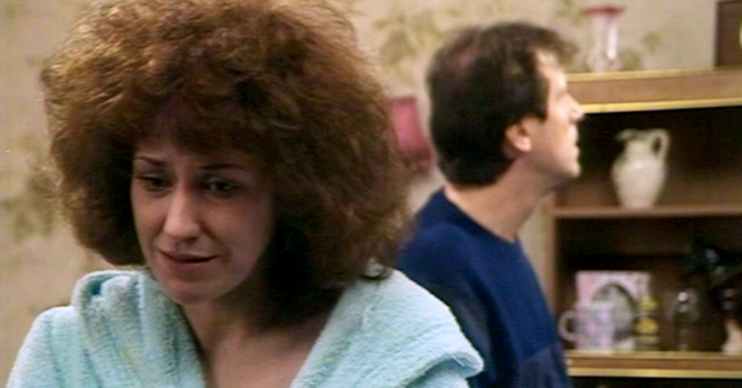 EastEnders viewers blown away by Den and Angie two-hander episode

The episode aired originally back in 1986

EastEnders viewers were blown away by how good Den and Angie’s two-hander episode is.

The classic ep, which originally aired in October 1986, was re-aired last night (Tuesday, June 24) on BBC One.

In the classic EastEnders episode, Den explains to Angie that he doesn’t want to be with her anymore.

However Angie didn’t plan to let her husband get away so easily. After a conversation about divorce, she told Den that she only has six months left to live.

Hearing that his wife is dying, Den, who had been having an affair Jan Hammond, was immediately wracked with guilt.

Angie then used this ‘illness’ to convince Den to stay with her. She told him if he stayed with her until she died, he would be more respected than if he divorced a ‘dying’ woman.

It would mean he wouldn’t lose half of their assets and would be able to move on with Jan when she was gone.

Watching the episode, fans of the show were immediately blown away by how good it was and how impressive the acting was.

I haven't watch #EastEnders in about 10 years, but just had to tonight, loved the Den and Angie era was soap at it's best 👍

How iconic was that episode of #EastEnders truly #classicEE
Amazing from Den and Angie. Still the best soap on TV.

I’ve seen every ‘80s episode of #EastEnders and I’d rewatch them all again. One of the greatest eras. Angie and Den are superb. #ClassicEE

Loving the old Eastenders episode.Den n Angie were the best! I'm back in the 80s curly perm and everything!#EastEnders

EastEnders: What happened to Angie?

Angie continued to pretend she was terminally ill for weeks. However during a trip on the Orient Express, Angie ended up getting drunk and confessing to a barman she’s lying about being ill.

Den overheard the conversation and served her with divorce papers on Christmas Day.

In 1988, Den and Angie eventually did split and she went to Marbella. But in 2002, Angie’s drinking caught up to her and she died of cirrhosis of the liver.

Anita Dobson reveals a secret about the episode

In last night’s episode of The One Show, Angie actress Anita Dobson talked about the classic episode.

On the show, Anita revealed a secret about the episode.

She said: “I remember Leslie said to me before we actually recorded it and we were doing the actual scene, he said: ‘What do you reckon? How many takes?’and I went, ‘Maybe two?’ Maybe more if we’re lucky’

“We started the scene and in the middle of it, he picked up the table and threw it against the wall and it burst into a thousand pieces. He looked at me and went ‘one take.'”