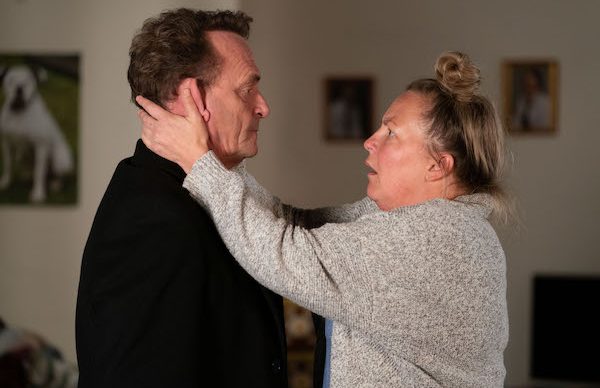 EastEnders viewers beg Karen Taylor and Billy Mitchell to get together

Viewers of EastEnders have begged for Karen Taylor and Billy Mitchell to get together.

Over the last couple of weeks, fans have seen the two grow closer as Karen began working behind the bar at the E20 with Billy.

Although he wasn’t overly keen on having her work with him, the pair seem to have formed a friendship, but could it turn into something more?

In last night’s episode of the BBC soap (December 2 2019) Martin told Billy that Ben was the loan shark that Karen owed money too.

Karen and Billy are so cute. Can they get together already?

Billy decided to pay his cousin a visit and warned him to leave Karen alone or he’d tell Ben’s dad, Phil about what he had been up to.

Later, Billy told Karen he’d got rid of her debt and a grateful Karen gave her friend a kiss.

Afterwards, hilarious Karen leant back and said, “Not bad. I think this calls for a little celebration”, before cracking open a can of beer.

Viewers have begged for the pair to get together.

Karen and Billy are so cute. Can they get together already #eastenders

I hope Karen and Billy become a thing #EastEnders

Viewers know Billy has been single since his split from ex-wife Honey.

Although Honey moved on with Adam Bateman, Billy has still harboured feelings for her.

Meanwhile Karen, who has also been unlucky in love, currently lives with her ex-boyfriend Mitch, who is the father of two of her six children.

Although they live under the same roof, Karen and Mitch are just friends.

Would you like to see Billy and Karen become a couple?