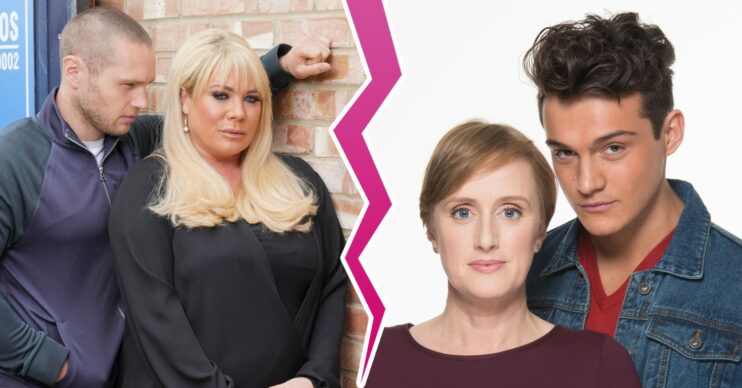 One way they do it to take a risk with an age-gap relationship – but these romances are often doomed to failure, with this lot as cases in point.

While not quite illegal, this feels like it should be.

After all Jay was the foster son (ish) of her husband Billy Mitchell.

And then there was the whole situation where he had sex with a child and had to sign offender’s register and Honey didn’t want him near her children.

It’s just all very much a big fail and we need to stop pretending it’s acceptable and just move on.

They’ve split now, so let that be the end of it.

In mourning from her ex-husband’s death, Jenny was vulnerable when Leo made his move on her.

And while she brushed him off at first, she soon came round to the idea of the hunky builder priming her knotholes and tending to her mortar, or whatever it is builders do.

Even finding out she went to school with his dad didn’t put her off.

But now they are on the rocks with him hiding his new planned life in Canada from her. Oh Jenny, boys only think of themselves.

If you’re going to bring Michelle Fowler back with a new face then at least don’t give her a new personality to go with it.

When Michelle returned she had transformed from old Michelle, to a sordid female version of Dirty Den after he knocked her up at 16.

For she didn’t return alone – with her came her former student and current lover Preston Cooper.

Queen Sharon had every reason to cheat on her dreary husband Phil Mitchell.

He’d humiliated her enough over the years and she deserved some happiness – but did she have to find it with Keanu Taylor, a man young enough to be her son?

Yes he looked great with his clothes off, but there was nothing up top – and the whole thing blew up in Sharon’s face.

There’s an age gap relationship and there’s grooming and abuse – and this was definitely the latter.

Cain Dingle set about grooming 15-year-old Ollie to get back at her mother for ending their affair.

It was a sick plot, wrong on every level – and yet Emmerdale still broadcast it. And again during the Classic Emmerdale slot.