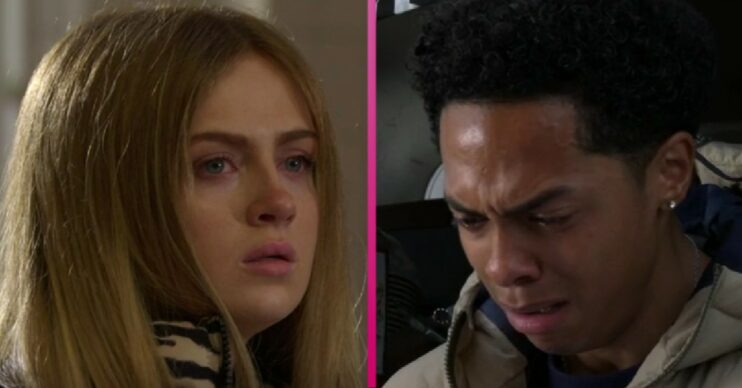 In the scenes Tiffany got into an argument with ex-husband Keegan and was lead away by her new boyfriend Aaron.

They went for a drink but when Aaron snapped at Tiffany for picking up his ringing phone, he grabbed her arm and told her it was no wonder her husband cheated on her.

However Tiffany told him never to touch or speak to her like that and it became clear their relationship was over.

Later Tiffany suggested to Liam she joins him in Germany, knowing he was going back soon.

Liam broke the news to Keegan and later Keegan gave Tiff the money back she put in his fundraiser.

But Tiffany and Keegan shared a moment and ended up sleeping together.

After their night together, it became clear the two still loved each other and Tiff wrote Keegan a letter asking to meet by the tube before she goes.

She then gave the letter to Keegan, asking him to wait to open the letter.

However when Keegan opened the letter he found their signed divorce papers and her half of their jigsaw letter.

Read more: I’m A Celebrity: Why did Adam Woodyatt split from his wife after 22 years?

It turned out the letter was switched by Liam, who got rid of the original letter.

Tiffany was left heartbroken when Keegan didn’t turn up at the station and assumed Keegan no longer loved her.

They fully ruined Tiffany and Keegan.

She then decided to leave Walford with Liam, but fans were disappointed with Tiffany’s exit and how things ended with her and Keegan.

Nah Liam swapping the letter makes me SO mad. Why couldn’t they give Tiffany and keegan a happy ending 😭 #eastenders pic.twitter.com/EixZmsHQek

they fully ruined tiffany and keegan… what kinda exit is this? #EastEnders

Read more: Gray Atkins in EastEnders: How many people has he killed? When will he be caught?

Did you watch last night’s EastEnders? Leave us a comment on our Facebook page @EntertainmentDailyFix and let us know what you think.