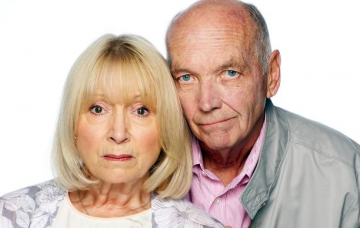 Could the beloved couple make a shock comeback?

The pensioner was found unconscious on the floor after suffering a shock collapse at home.

He clearly suffered as he missed Bernadette Taylor’s chess match and called her four times before collapsing.

Luckily her mum Karen realised something was wrong and they abandoned the match and rushed over.

But is Ted dead, or can he be saved?

Viewers were divided on the fate of the controversial character who they dubbed “Fake Les”.

He arrived in the Square alongside his wife Joyce last year.

However Joyce died a few months ago of a secret illness, leaving Ted heartbroken and alone.

Is it game over for poor Ted? #EastEnders pic.twitter.com/1WjuicFKT8

And now while some fans were concerned for Ted, others thought his exit would see the perfect excuse for Les and Pam Coker’s return.

The funeral director and his florist wife left Walford after the murder of their grandson Paul.

But Pam has made some appearances since, and they still own both the funeral parlour and their flat.

And with Honey Mitchell having to leave the flat because she can’t afford the rent anymore, there’s the perfect opportunity for the beloved couple to make a comeback.

One fan wrote: “Is Fake Les leaving too? Now can we have Pam and Les back #Eastenders”

Another added: “Just saying— it wouldn’t surprise me if that’s how Ted went. At least it wasn’t the Black Cab. Sad that his and Joyce’s characters weren’t explored further. #EastEnders”

Do you want the Cokers back? Let us know what you think of this story by leaving us a comment on our Facebook page @EntertainmentDailyFix.