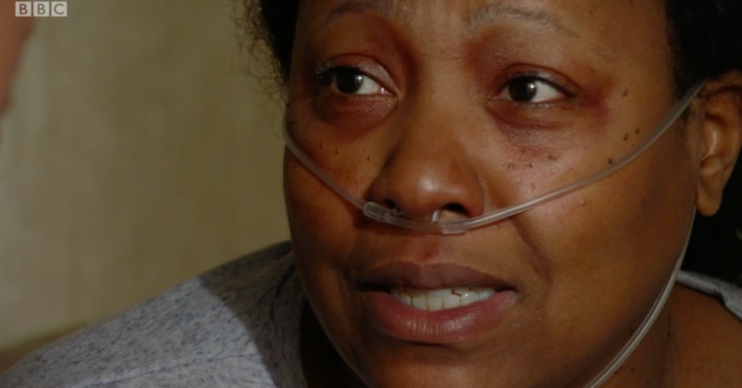 EastEnders fans have been left in tears after an emotional Dinah asked Karen Taylor to help her die.

Bailey’s mum, who suffers from MS, was found struggling on the floor after falling and being unable to get up while home alone.

She was able to phone Karen and beg her to come to help her, but after seeing her struggle Karen called a doctor to see Dinah and her infection was diagnosed.

Refusing to go to the hospital for effective treatment, Dinah insisted that she could cope.

But when the doctor gave her the antibiotic prescription, Dinah slipped another prescription for painkillers into the pile and Karen went off to get them for her.

And later on it became clear why Dinah had wanted the extra pills – to end her life, and she wanted Karen to help her do it.

Begging Karen, an emotional Dinah told her: “Look at how she’s been, look at what I’m putting her through.

Karen struggled with what she had been asked and viewers found it upsetting, with one saying: “Oh God Dinah wants Karen to help her end things 🤦🏻‍♀️🙁 #EastEnders.”

A second said: “Dina😥 I feel so much for her. Bailey is such a blessing but she can’t do it all alone. She needs to be a kid. There has to be more than washing to be done #EastEnders.”

Another said: “Karen and Dinah are really putting in the performances, very interesting talking point!”

However, while some viewers were in tears, others weren’t happy at the recycling of the plot from decades ago when Dot Cotton helped her friend Ethel die.

One said: “It’s what Dot did with Ethel in the days way back!!”

What do you think of the storyline? Leave us a comment onour Facebook page @EntertainmentDailyFix and let us know what you think!