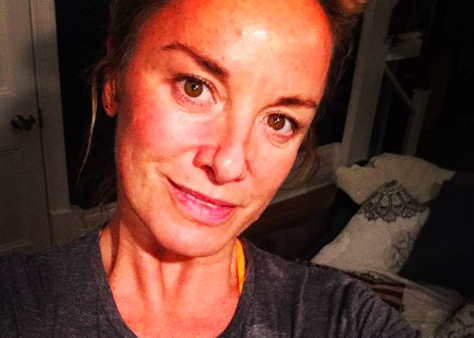 Tamzin Outhwaite has revealed she’s given up alcohol, red meat and dairy in a bid to lead a healthier lifestyle.

However, she admits, it comes at a price!

The EastEnders actress, 48, gave her 208,000 Twitter followers an update on her progress today (May 3) but revealed her new regime has an unexpected downside.

She said: “Day 13 of no alcohol, no red meat and no dairy… Feeling Tippity Top, apart from waking at 5am every day, whether I’m working or not.”

Former co-star Nitin Ganatra was one of the first to reply, implying that the food ban was his suggestion.

As fans began to share their own tales of going alcohol free, Tamzin admitted: “It’s amazing how much energy I have.”

Tamzin has not revealed if the food ban is temporary or permanent, but it’s no secret that she strives to maintain a generally healthy lifestyle.

She often posts about her hot yoga sessions and recently told her 220,000 Instagram followers that she was attempting to get herself back into regular gym sessions.

Sharing a photo of herself lifting weights, she said: “I’m finding the gym a little tricky to get back into, but having @tc_childie with me always makes it joyous @davidlloyduk#couplesthattraintogether…”

The mum of two is dating actor and personal trainer Tom Child, who is 21 years her junior.

The relationship is her second since her divorce from Miranda actor Tom Ellis in 2014.

Tamzin and Tom split in 2013, amid rumours that he cheated on her with Lost actress Emilie de Ravin.

The Lucifer actor is now engaged to US star Meaghan Oppenheimer and recently shared pictures from their wedding shower at the home of Hollywood director Len Wiseman.

Would you give up alcohol? Leave us a comment on our Facebook page @EntertainmentDailyFix and let us know what you think!