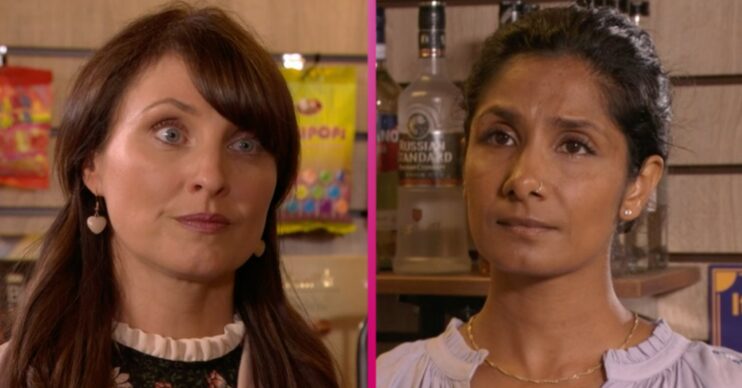 EastEnders fans are convinced Honey Mitchell and Suki Panesar are set for a shock romance.

The shopkeeper has become determined to help her boss through her grief after the murder of her son Jags.

Honey told her: “Jags dying – I can’t even imagine. So it doesn’t matter if you snap at me, or push me aside – I’m not walking away because that’s what friends do. You’re kinda stuck with me.”

“I’m not a good person,” said Suki as Honey told her not to blame herself.

However, Suki admitted the truth: “What happened to him, what I did.

“The police were nowhere near getting him – no-one needed to be punished, but he was defying me and I wanted to teach him a lesson.

“I put my own son in prison. Me – his mother. I might as well have killed him myself.”

Honey was horrified by the confession and distanced herself from Suki.

However after running into Ash and hearing how her mother was struggling to cope – Honey returned.

She wants to help Suki in whatever was she can.

“Please listen to me,” Honey told her.

“I am your friend and you must stop punishing yourself now.

“Maybe if you tell me, it might help you cope – you might find a way of forgiving yourself?

However EastEnders fans think there’s something else going on – and romance could soon blossom.

“I’m getting gay vibes from Suki and Honey,” said one. “Come on EastEnders don’t let me down.”

A second said: “Exploring both Honey and Suki’s more fluid sexuality in their middle age could be an interesting move.

“And I think Suki is starting to develop feelings already.”

A third said: “I don’t know why I’m excited over Suki and Honey knowing damn well this show ain’t gonna go there. #EastEnders.”