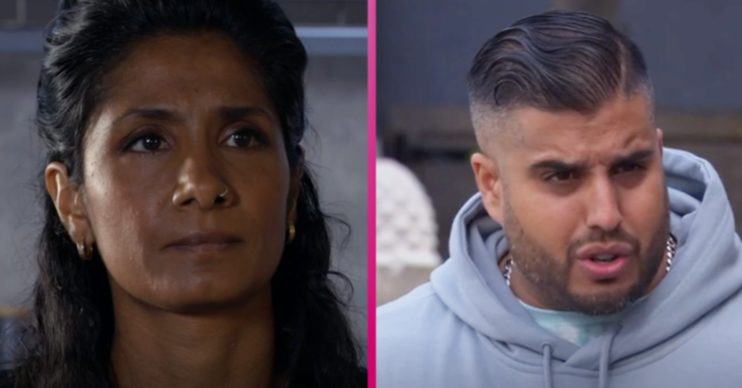 EastEnders: Suki branded ‘pure evil’ as she sets up Jags for his brother’s crimes

Jags was arrested for something Vinny did!

EastEnders character Suki has been branded ‘pure evil’ as she set up Jags for Vinny’s crime.

A couple of weeks ago, Ruby and Vinny plotted for Vinny to ‘rob’ Ruby’s club, so she could claim on the insurance. But when Martin saw Vinny, who was disguised, he ran after him.

After being chased into the Minute Mart, Vinny knocked Martin unconscious and called his family for help. His mum, Suki, managed to cover it up, making it hard for the police to find the perpetrator.

Although it seemed they were in the clear, Jags ended up upsetting his mum by announcing he is in a relationship with Habiba Ahmed.

Although Suki pretended to be happy, it was clear she was seething.

She then called the police officer looking into Martin;s assault and told them she could no longer protect Jags. She then handed the officer Jags’ jeans with Martin’s blood on it.

Read More: EastEnders: Is Frankie Mick’s daughter? Did he cheat on Linda?

After telling the rest of her children what she had done, Jags was arrested.

As the pest controller was taken away by the police, fans branded Suki ‘pure evil’ for setting up her own son.

I swear Suki in #Eastenders is pure evil…

Suki is evil for this. Her own son wtf #EastEnders

I cannot believe how evil Suki is, and to her own family. I know Jags is leaving but I liked him & Habbs together #EastEnders

Nah this suki lady is a witchhhhhhhhh #eastenders

last nights ep theres real undertone of testing family loyalty: Suki getting family on side to betray Jags,the betrayal of family in mick having Frankie& Linda with Max BUT with Callum initially agreeing to the wire but then CHOOSING his family over everything #EastEnders #Ballum

Last month it was revealed that the character Jags would be leaving Albert Square as actor Amar Adatia is departing the show.

The star joined the BBC soap last year as part of the Panesar family, but will be the first to leave.

According to reports, Jags will be going up against mum Suki.

Amar told Digital Spy: “Jags went against her and being the strong woman she is, just like their father in the past, anyone that goes against her doesn’t tend to fare so well.

“He knew what the right thing to do was in that Martin situation, but he couldn’t – he wasn’t allowed to.”

He revealed he was meant to leave earlier in the year, but the pandemic got in the way.

Amar added: “I always knew I’d only be in the show for a set period of time when I signed up.

“I had just finished shooting a film and had prior commitments to promote that. But then the pandemic hit and everything understandably got put on hold.

“With timings all pushed back, I was more than happy to stay a little bit longer to make sure that we wrapped up Jags’ storyline properly.”

Speaking further, he said he knows he was “really lucky to have those extra months of filming.” It allowed him to “spend time with everyone on set” before saying goodbye.