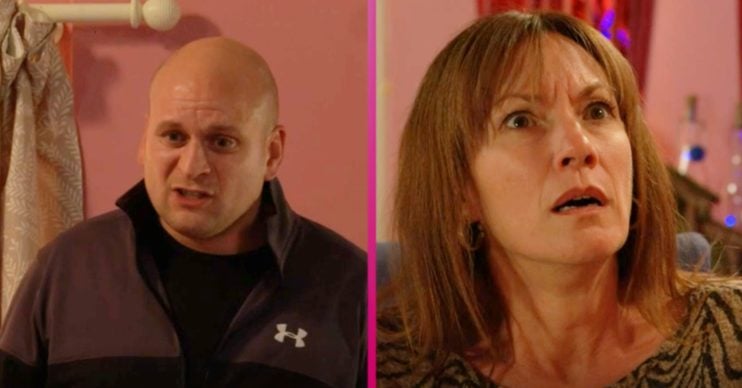 No one knows who attacked Ian

In last night’s episode (Tuesday, December 16) Rainie was struggling to keep the secret about her whereabouts on the night that Ian Beale was attacked.

Before the attack, Ian had made some horrible comments to Stuart and Rainie.

In last night’s episode, Rainie was unable to keep quiet any longer. She revealed to Stuart that she took drugs the night Ian went missing as she was feeling low after Ian berated her that day.

However Stuart was glad she was honest with him and assured his wife he loved her no matter what.

But soon, Rainie began to quiz Stuart on his whereabouts that night. He revealed he got into an altercation with Callum’s boss DI Thompson.

In a flashback, Stuart could be seen in an alleyway with the police officer.

He explained that Thompson came at him and he defended himself. Stuart punched Thompson, knocking him to the ground.

He then revealed that he stored Thompson’s body in the fridges and burnt his clothes in the allotments.

Whilst Rainie was horrified at first, she told Stuart they are ‘in this together’ before telling him she was proud of him, regarding the dead man in their fridge.

Viewers were also shocked by the revelation.

OMFG When Stuart said "I mean he's my little brother" – I was so shocked, I mean I expected him to do something to DIDH, but to kill him! 😱 I'm worried, I can totally see Callum saying he did it, to save Stuart, he'd absolutely sacrifice himself, due to guilt! 😬😭 #EastEnders pic.twitter.com/q04Cn0Z9Kb

But others found the confession scenes hilarious.

I love Rainie and Stuart 😍😂 "We've got a dead man in our fridge!" #EastEnders @RickyChamp1 @TanyaFranksRuns 💪🏻❤️

"I am proud of you, for being honest about the dead man in our fridge" has to be one of my favourite lines ever 🤣 God Rainie and Stuart are perfect for each other #EastEnders

Whoever wrote tonight's @bbceastenders give yourself a pat on the back, that was brilliant between Stuart and Rainie 😂😂 #EastEnders

Afterwards, the couple were unable to resist each other and began taking their clothes off before heading to the bedroom.

What did you think of last night’s EastEnders?

Will you be watching Christmas on EastEnders? Leave us a comment on our Facebook page @EntertainmentDailyFix and let us know what you think of this story.