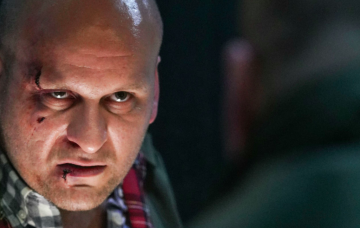 Walford is never going to be the same again

Stuart Highway will step up his evil plan against the Carters in EastEnders tomorrow when he hides in the Queen Vic ahead of the shock shooting.

After months of terrorising the Carter family, Stuart returns to Walford with a terrifying scheme and a harmful intent towards his former best friend.

It’s now been confirmed that with the Carters having locked up and going to bed, an unsettled Mick takes Lady Di for a walk.

But unknown to him evil Stuart is hiding in the pub waiting to take revenge and he’s drawn Sharon Mitchell’s son Denny into it too.

And Stuart has paid the lad to do another job – hiding something for childhood friend Mick.

A gunshot will ring out, causing panic on the Square and the police and an ambulance will soon be called.

But Mick is stunned when he arrives to find his former childhood friend has laid out the tools he wants Mick to use to get his revenge.

Understandably, kind-hearted Tina suggests he spends the night at the Vic.

Is it time for Stuart to die? Leave us a comment on our Facebook page @EntertainmentDailyFix and let us know what you think!