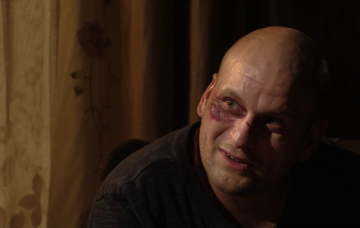 EastEnders: Stuart Highway is ALIVE and hiding at Dot Cotton’s

Is he back to kill her?

EastEnders viewers are convinced their worst fears are about to come true, as Stuart Highway menacingly appeared from the shadows in Dot Cotton’s house at the end of the Christmas Eve episode.

Yes, he’s alive… it appears Mick Carter couldn’t go through with killing him after all.

But fans are worried this will lead the way for psycho Stuart to bump off beloved Dot!

Dot is completely oblivious to the danger lurking under her roof, and has insisted that Stuart stay and have Christmas Dinner with her.

“Well, I suppose I am starting to like Walford…,” he said, grinning disturbingly.

This sent a chill down many viewers’ spines, and they shared their worries about Dot’s safety on Twitter.

Stuart is alive + is Staying at dots, I dont like the look of this!!#EastEnders@bbceastenders@RickyChamp1

I didn’t think Stuart would still be alive, and.. Stuart isn’t to be trusted around Dot!!
👎👎👎👎@bbceastenders #EastEnders

He touches Dot, the squares going to lynch him in the middle of the square. #eastenders @bbceastenders

If you are even just a casual watcher of EastEnders, we urge you to tune in tonight, as it’s going to go OFF, and everyone will be talking about it for days!

What fate do you think awaits Dot and Stuart?  Leave us a comment on our Facebook page @EntertainmentDailyFix and let us know what you thought of it!