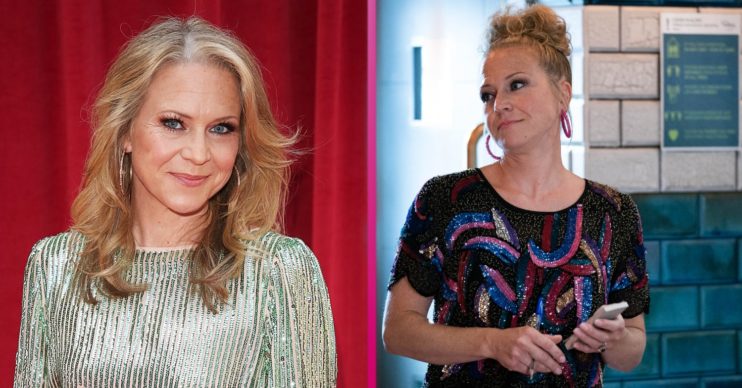 Kellie and her husband Paul already have two sons!

Kellie Bright, who plays Linda Carter in EastEnders, has given birth to her third baby are a “rollercoaster” IVF journey.

“We’re thrilled to announce the safe arrival of the latest addition to our family. Mum and baby are doing well.”

The actress, 44, and her husband Paul Stocker, 38, already have two sons, nine-year-old Freddie and Gene, who is four.

Read more: Jacqueline Jossa reveals her one condition on returning to EastEnders as Lauren Branning

Kellie welcomed Freddie naturally when she was 34 before having In Vitro Fertilisation in her second pregnancy.

How did Kellie Bright announce pregnancy?

Kellie revealed after the first two embryos didn’t work, she feared the third had also failed after she had a bleed, which left in tears.

Speaking to OK! about her IVF journey Kellie said: “After the first one I was philosophical. After the second one, I started to panic.

“And with the third one, I didn’t think that had worked either because I had a bleed two days before I was due to take the pregnancy test.

“It was significant for me to be in floods of tears with my husband cradling me.”

But later Kellie discovered she was pregnant with her third baby.

Speaking about her bleed, she said: “It wasn’t ever really explained but it wasn’t implantation and it didn’t affect the pregnancy. It stopped quite suddenly so I did the test, even though in my heart I thought it hadn’t worked.”

“So when it said ‘pregnant’ I almost fell to the floor. I was so shocked and thrilled I couldn’t believe what I was seeing.”

She added: “I ran downstairs to Paul. I just stood crying, really crying, and he couldn’t understand a word I was saying. It took my breathe away.

“I knew it was my last chance, so the fact it was positive was so unbelievably wonderful. A truly wonderful, crazy life moment.”

HUGE congratulations to Kellie and her family!