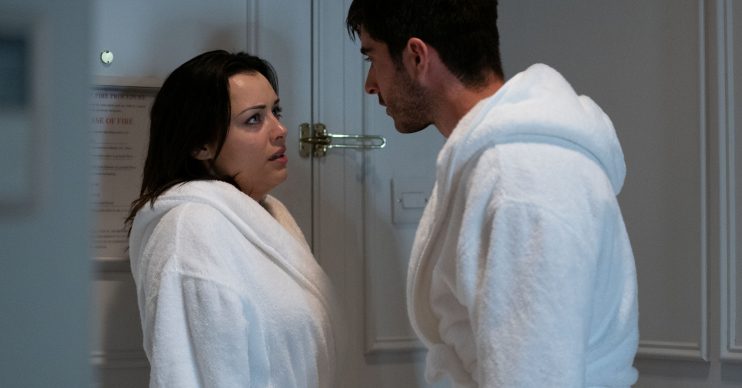 Will Tiffany and Callum get her to safety in time?

The last time EastEnders viewers saw Whitney Dean, she was terrified for her life after finding out lover Leo’s real identity.

Horrified by Tiffany’s revelation that Leo is Tony King’s son, Whitney tried to run away from the hotel room she had been sharing with Leo on their ‘romantic’ mini-break.

In new photos released tonight (December 11), EastEnders has given us a sneak preview of what will happen next in Thursday’s tense episode.

We see Whitney desperately trying to escape from Leo, who isn’t allowing her to leave the room.

Can Tiffany and Callum get her to safety in time?

Fans of the show know Leo is the son of paedophile Tony – the man who groomed Whitney when he was dating Bianca Jackson and Whitney was just 12 years old.

The abuse went on until Whitney was 16, and Tony was eventually jailed for his crimes – where he died in prison.

Leo came to Walford in September looking for Bianca, and intent on revenge – believing his dad was innocent of the abuse.

After his arrival, he initiated a relationship with Whitney – who had no idea who he was until this week’s thrilling Tuesday night visit to Walford.

As Whitney seemed to fall hard for Leo, both her ex-fiancé Callum and Tiffany have had a bad feeling about him and on Tuesday (December 10), their suspicions were confirmed.

Callum was curious when he learnt Leo had bought flowers and taken them to a nearby cemetery.

Knowing Leo wasn’t a local, he confronted the solicitor wanting to know who the flowers were for.

But Leo didn’t take kindly to Callum’s questions and threatened Callum to keep out of his business.

More suspicious than ever, the funeral director voiced his suspicions to Tiffany and she later decided to call her mum Bianca and ask some questions.

During the phone call, Bianca informed Tiffany that Leo was Tony’s son.

In a horrible twist of fate, Leo and Whitney were at that moment in a hotel room for her birthday enjoying a mini-break.

The pair soon ended up sleeping together but afterwards she was shocked to receive a call from Tiffany and Callum telling her who Leo really is.

The episode ended as Whitney tried to get out of the hotel room, but Leo stopped her.

Will she escape unharmed?

While some viewers believe Leo is genuinely falling in love with Whitney, others predict she’ll fall pregnant with Leo’s baby after sleeping with him.

Do you think Whitney will be pregnant with Leo’s baby? Leave us a comment on our Facebook page @EntertainmentDailyFix and let us know what you think!