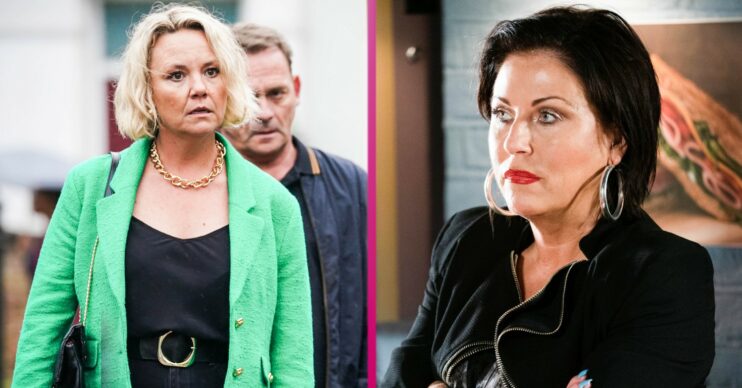 Meanwhile Ruby becomes suspicious of Jean and Shirley, and Rainie starts to wonder about Linda’s pregnancy.

Read more: EastEnders: Why has Janine come back as Judith Bernstein and when did she use her before?

Earlier this week, Kat told Tommy that Scarlett is actually is half-sister – his biological father is Scarlett’s dad Michael.

Seeing Tommy desperate to help his sister, Kat decided she wanted to be Scarlett’s carer and went to the courthouse.

However she was shocked when Janine turned up. Both women tried to fight for Scarlett, however the judge ruled to adjourn as new information had come to light.

Tonight Phil and Kat are frosty as he’s not keen on her getting involved with Scarlett.

Billy tries to stick up for Janine, much to Kat’s annoyance.

Has Janine got anything to do with it?

Shirley and Jean, who’s trying her best to be as uninvolved in the criminal activity as possible, set their plan in motion.

Martin tries to reach Jean again, as Ruby distracts him. However Martin soon gets a call from Lily’s school.

Later Ruby is sure she can smell something, however Jean and Shirley ignore her and she leaves.

She returns later on and it’s clear that they’re hiding something.

At home Martin tells Ruby that Lily got caught with weed at school. Lily insists it’s from a classmate, but it’s the final piece that Ruby needs to confirm her suspicions.

Rainie does some digging

Violet mentions that Linda looks very big for how far along she is, which gets Rainie thinking.

She later pops round to see Linda, asking for a cuppa.

She spots her hospital bag and goes rooting through it when Linda’s back is turned.