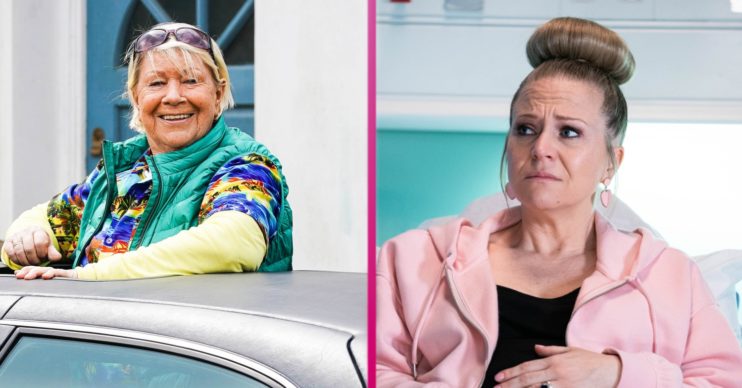 Meanwhile Mo leaves Walford and Nancy is suspicious about Linda.

Phil’s blood boils when he sees Callum in the café and immediately leaves.

Later, Kat tries to get Phil and encourages him to make amends with Ben and also to reach out and become a part of Raymond’s life.

Soon Bert and Ernie are upset that they don’t have anyone coming to ‘Bring Your Dad’ day at school and asks if Phil will come.

Recently Jean managed to convince Mo to go on a cruise with Fat Elvis.

Jean catches Mo acting shifty around the garage as a police car pulls on the Square.

The thought of saying goodbye to Mo hits Jean as she mutters to herself that she might not be around when she returns, which Zack overhears.

Later in The Vic, Jean is agitated by what Mo has revealed to her, as Zack watches on, clearly concerned.

Soon Jean and Kat bid a tearful farewell to Mo as she heads off on her cruise.

But once she’s gone, Zack asks what Jean what she meant earlier. Jean shrugs him off and asks if he can help her.

Earlier this week pregnant Linda collapsed in the gym.

Meanwhile Nancy is suspicious that Linda is hiding something and confronts her.

Will Linda tell her about the baby?