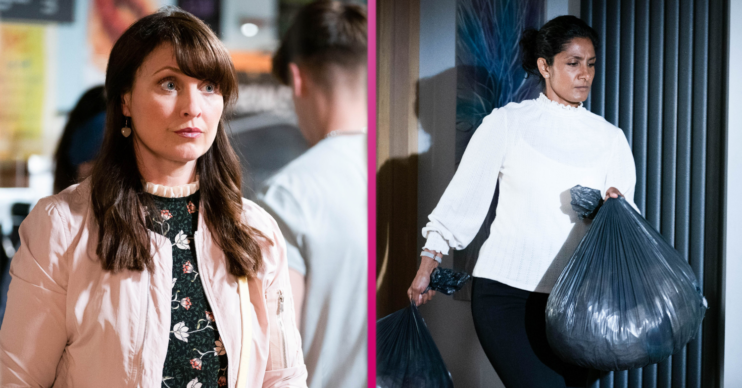 Suki makes a confession to Honey

Meanwhile Lexi and Bailey want to visit Isaac and Kat worries about Tommy.

Earlier this week, Suki was left hurt after she heard Kim and Honey insulting her painting.

Upset, she ended up throwing all of Jags’ belongings in the bin, leaving Ash and Kheerat horrified.

However the bad news didn’t stop there. Soon the police turned up and arrested Kheerat for Simon’s assault.

Tonight Ash and Vinny are shocked to hear from their dad.

Meanwhile a guilty Honey insists on taking Suki as her plus one to the Pride of Walford dinner as Kheerat storms in.

He berates Suki about what she did.

Suki confesses all to Honey – Jags is dead because of her, she set him up for what Vinny did, leaving Honey reeling.

What will Honey do?

Read more: Strictly Come Dancing cast: How old is deaf actress Rose Ayling-Ellis? Does she have a boyfriend?

Jackie tells Isaac she’s had no word from her son yet.

Lola shares the card the kids made for Isaac with Sheree, who’s not impressed.

Soon Lexi and Bailey ask Sheree if they can visit Isaac, but she refuses.

Kat tells Billy that she’s worried she’s put too much pressure on Tommy. She hopes that his trial went well.

Kim soon arrives and shows Kat a video that Tommy put online of his goal. However this makes Kat feel even worse.

EastEnders continues tonight at 7.35pm on BBC One.