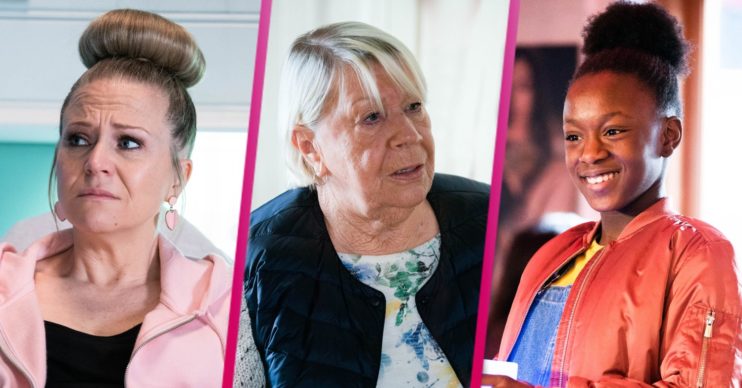 EastEnders spoilers for tonight reveal that Linda tells Sharon about her pregnancy.

Meanwhile Iqra considers calling the police on Mila’s mum and Jean manages to convince Mo to go on her cruise.

In last night’s scenes (Monday, May 31) Linda collapsed whilst in the gym.

Tonight Sharon and Nancy look after Linda as they wait for the ambulance. Linda tells Sharon she’s pregnant but Nancy doesn’t know.

But Linda begins to panic even more when she realises she can’t feel the baby moving.

At the hospital, Linda reveals to a shocked Sharon that Mick isn’t the father of her unborn child.

Later Linda is overjoyed when she finds out the baby is fine.

Mila opens up to Nygani about her beliefs on FGM in an attempt to convince her not to allow it to happen to Kioni. But Kioni has overheard everything and runs off.

As Mila and Iqra desperately search for Kioni, Mila tells Iqra that her mum isn’t so bad.

But Iqra is sceptical and considers calling the police. Mila begs her not to. What will Iqra do?

Jean convinces Mo to go on a cruise

Jean manages to convince Mo to go on the cruise by lying about why she’s been acting so odd.

Jean and Kat decide to throw her a going away party.

Kheerat goes to Ben for help

Kheerat asks Ben to help for protecting Jags in prison. Ben tells him to consider it done.