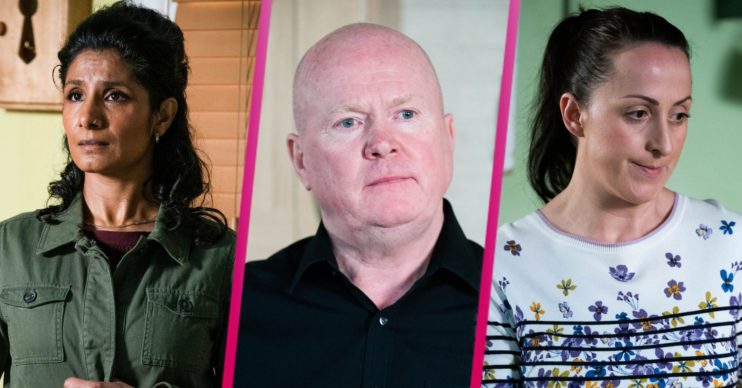 Meanwhile Mila is worried about Kioni and Keegan gives Sonia food for thought about Rocky.

Vinny wonders about his brother’s mystery woman, but Kheerat refuses to kiss and tell.

He later runs into Sharon who mentions she’s free all day, but Kheerat isn’t keen – until he sees Gray and suddenly changes his mind.

Suki returns from her trip and when Vinny mentions Kheerat is seeing someone, Suki is annoyed.

Suki is desperate for money for mysterious reasons and asks Phil for a loan. However Phil refuses.

Over at Walford East, Sharon and Kheerat agree to keep things casual. But when Suki interrupts them, Kheerat revels in his rebellion.

Read: What is FGM as EastEnders starts a new storyline for Mila?

In Tuesday’s episode (May 25) Mila explained to Kathy that her mum was planning to take her little sister Kioni away and told her she was “the age to be cut.”

Kathy was horrified, but wanted to know how Mila could be certain. The young woman explained that it happened to her.

Tonight Mila is worried about protecting Kioni as Kathy orders Bobby to look after her.

It’s Kim’s birthday but she’s nowhere to be found. She finally returns home with her new beau.

Soon Chelsea meets Dwayne. But what will she think of him?

Keegan leaves Sonia with some food for thought on Rocky. He tells her that he’s grateful he gave Mitch a second chance.

Later at The Vic, Sonia tells Patrick and Keegan she’s called her dad and setting some ground rules this time.