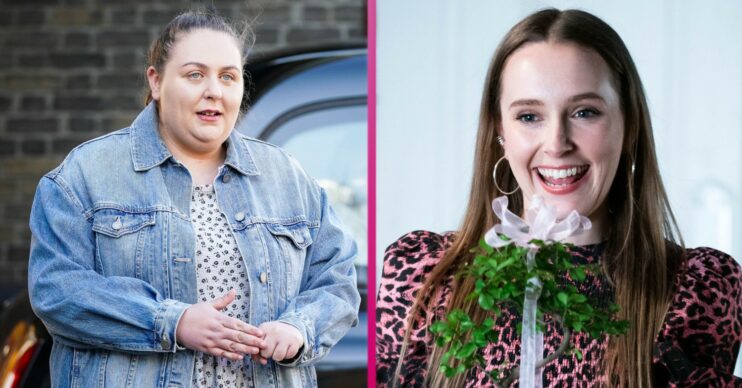 Phil tells Kat about his decision

All this and more in tonight’s double bill of EastEnders.

Tonight there will be two episodes of EastEnders.

The first episode will be at 7.40pm, followed immediately by a second episode at 8.05pm.

It’s Linda’s birthday and she’s surprised to get a present from Max, clocking the postmark.

Soon Frankie suggests they throw a party, but Linda declines.

However Frankie goes ahead with the party regardless, inviting Sonia and her dad, but not Kathy.

Meanwhile Mick and Linda agree that it’s too risky to tell Rainie that Max sent a gift from Croatia.

When they return home, they’re horrified to see that Frankie has thrown Linda two parties in one, drawing unwanted attention to her pregnancy.

Shirley and Rocky are sharing a laugh, but he’s smitten when Kathy shows up.

As Jack arrives at the pub, Mick and Linda have to decide to tell Jack what they’ve found.

Linda tells Frankie she’s not happy about the surprise party. Nancy tells her mum that she owes Frankie an apology.

She tells Linda that she thinks it’s time that Frankie and Shirley knew Max is the father of the baby as last night could have been avoided. However Linda refuses.

Ruby gets some news

Ruby is surprised when the hospital need her to have another procedure before the laparoscopy.

Later, Ruby is with Jean and tells her she worries that she doesn’t deserve happiness, but Jean insists otherwise.

Later Ruby tells Martin she’ll have the procedure as she wants to keep trying for a baby.

Phil makes a decision about Raymond

In the café, Phil sees Raymond and Denise and invites them to the opening of the cab company and the laundrette, but Denise is dismissive, leaving Phil angry.

Kat interviews Mitch for a cab driver role and he gets the job.

Later on, having clamed down, Phil decides that he wants to tell Raymond that he is his dad and Kat is stunned.

She tries to get him to see sense and play the long game in case Denise stops him seeing Raymond all together.

Rainie, Stuart and Bernie head to their insemination appointment and are less than pleased when Violet insists she’s going with them.

She demands that Bernie get the full amount agreed, forcing Rainie to admit she’s paid for a private investigator to track down Max.

Later Bernie tries to order more pills leaving Tiffany even more worried. She sees how much they money means to the Taylor’s as she watched Bernie hand over her first instalment.

Chelsea gets closer to Gray

Denise sees Chelsea who brushes off the fact that she was charged and bailed for the stolen handbags.

She has her eyes set to Gray, who confirms their dinner date that night.

She convinces Denise to babysit Mack and Mia to Kim’s disdain.