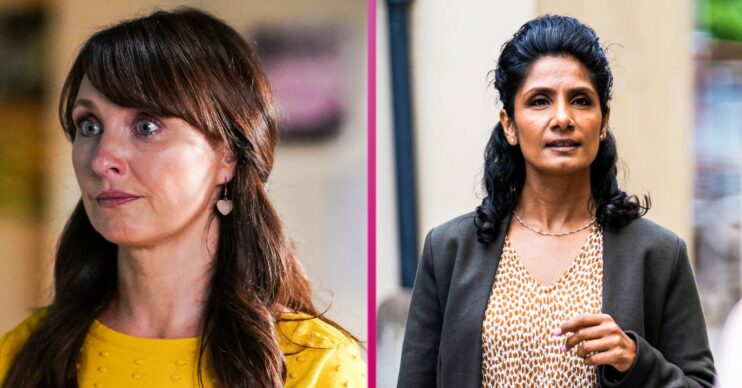 EastEnders spoilers: Patrick has an idea

Patrick and Denise head off to see their lawyer about the salon.

Kim is filming a livestream for The Kimfluencer when they arrive home, distressed the meeting didn’t go well.

Later, Patrick offers to release equity from his house to get the salon back but Denise won’t allow it.

Keegan overhears Liam on the phone and tells Tiffany, but Liam angrily denies any wrongdoing.

Meanwhile Rainie does a drug test for Bernie.

Later Bernie gives Keegan food for thought, asking if he should be leaving if he’s so worried for Tiffany.

On the way back from the station, Keegan spots Liam coming out of the pawn shop with a wad of notes.

In last night’s scenes, Honey told Suki if she didn’t stop making her life a misery, he would tell everyone the truth about Jags.

Suki later apologised to Honey and begged her to tell Kheerat the kiss was a lie.

Honey filled in Jay and told Kheerat the kiss was a lie.

However when Honey approached Suki and tried to see if they could be friends, Suki told her no one would believe her now if she told them about Jags before firing her.

Tonight Honey packs for Miami. Jay suggests calling the Minute Mart head off to get even with Suki.

Will she get even?

Dotty returns home to find a distraught Whitney. She has lost her engagement ring and is blaming Sandy.