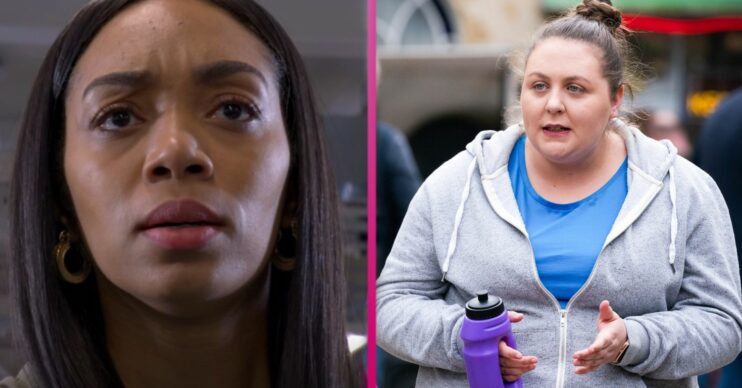 Karen spots Gray and Chelsea together

Meanwhile Karen and Mitch see Chelsea and Gray out for a drink together and Karen worries Bernie is struggling to move on from Molly.

Kathy is having an event at the Prince Albert to honour the musical bookings she had for Walford Pride.

While Mila is still angry with Kathy, Iqra feels terrible that Kathy is taking the blame for Nyangi’s arrest.

Later Kathy sets up Rocky and Sonia to talk through their issues.

Meanwhile Iqra offers Bobby encouragement with his dating troubles, telling him he doesn’t need to lie.

However talking about lying only makes her feel bad for lying to Mila. She tells Mila the truth leaving her shocked.

Chelsea in danger from Gray?

Meanwhile Sheree is incredulous that Chelsea seems indifferent about the events the day before.

Chelsea explains that with Gray as her solicitor she will be fine and won’t need to pay if she keeps flirting with him.

Later, after going through her case, Chelsea asks Gray to go for a drink, where Karen and Mitch spot them.

However with Chelsea unaware of Gray’s violent past, could she be in danger?

Read more: Hetti Bywater’s clap back at rude trolls over body insults – ‘Calm the f down’

Meanwhile Rainie tells Bernadette she’s still not sure who she will choose as her surrogate.

After a run with Bernie, Karen tries to encourage Bernie to come to Kathy’s event, but Bernie doesn’t want to drink.

Karen mistakes her reluctance for sadness over her break-up with Molly and encourages her to move on.

EastEnders continues tonight at 7.45pm on BBC One. All of this week’s episodes are available to watch on BBC iPlayer.