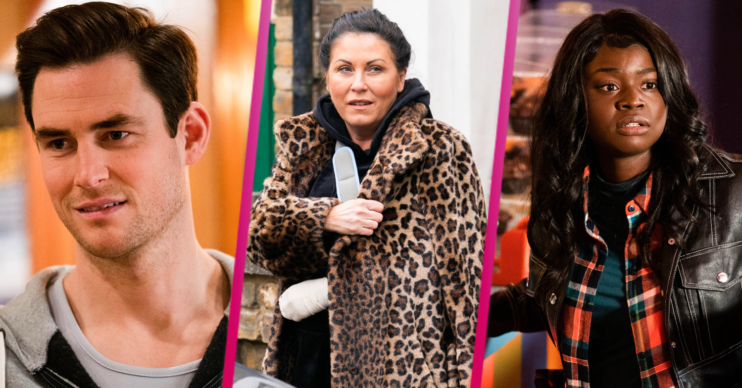 EastEnders spoilers for tonight reveal Sharon has her gym launch.

Meanwhile Kat returns home from hospital and Mila is left worried after running into her sister.

Zack has been drinking all night with Martin. As Sharon tries to check in with Linda, but she’s ignored.

Meanwhile Ruby is unimpressed with Martin, who is hungover, and ends up having to attend her doctor’s appointment by herself.

At the gym launch, Sharon spots Zack turning on the charm with an important potential client.

Seeing Zack is stressing out Sharon, Kheerat promises to have a word with him.

Kheerat manages to prise Zack away and shut him in the locker room before cranking up the music so no one can hear him.

As the music is turned down, Zack’s shouts can be heard. Nancy lets him out of the locker room.

Soon Zack takes matters into his own hands…

Meanwhile Kat returns home from the hospital with Phil by her side. He’s immediately subjected to the Slater chaos and gets agitated.

But when Phil shows up later to save the day, Kat is impressed.

Later Martin tells Jean that he’s losing Ruby and without her the kids will have nowhere to live.

At the Prince Albert, Iqra is frustrated that Kim has put her and Mila’s love life all over her new website.

She soon sees a young girl pocketing a candle and Mila recognises her instantly – it’s her little sister Kioni.

Mila asks Iqra for privacy. Soon Kioni explains that her mum is taking her away for the weekend soon.

But Mila tenses at the news.