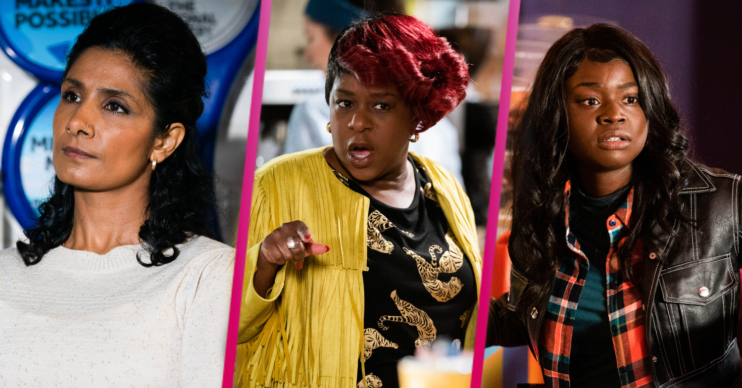 EastEnders spoilers for tonight reveal Suki makes a desperate attempt to get her hands on some money.

Kheerat enjoys making Suki squirm about his dalliance with Sharon as she dashes out, she gets a call from Jags.

Later Stas turns up at the Minute Mart to meet as Kheerat arranged. But Suki reveals the message from her as she wants to talk business.

Kheerat is furious with his mum for messaging Stas behind his back. But she’s forced to explain to him that Jags is in trouble.

What is going on with Jags?

Read more: What is FGM as EastEnders starts new storyline for Mila?

Sonia tells Tiffany that she’s taking it step by step with her dad.

Later, Sonia pops into The Vic only to be faced with Rocky again.

In last night’s scenes (Thursday, May 28) Kim returned home for her birthday with her new man Dwayne.

Chelsea immediately recognised him and warned her aunt that Dwayne dated her friend and was seeing four other women at the same time.

But tonight Kim still has her blinkers on when it comes to Dwayne.

Will Chelsea be able to show her aunt what he is really like?

Bobby and Iqra are stuck

Bobby and Iqra are both battling with their feelings.

Iqra has doubts about whether Mila really cares, unaware of what’s really going on.

Will Mila tell her the truth?