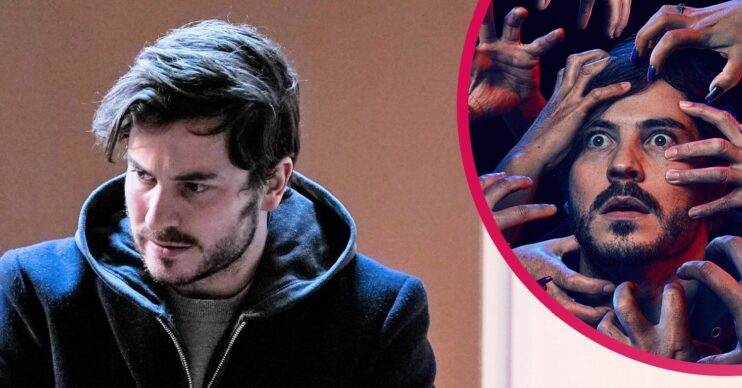 EastEnders spoilers tonight: The end for Gray, but will he murder again?

EastEnders spoilers for tonight reveal Chelsea is in danger from her killer husband Gray after he found out she contacted the police.

As Gray’s crimes are beginning to come to light, he started to realise he needed to get out of Walford.

He later went to get Chelsea to tell her he was leaving Walford and wanted her to come with him.

But over in the pub, Mick and Whitney told Mitch they believe Gray killed his daughter Chantelle.

Chelsea demanded answers from Gray about Chantelle and he confessed he did kill his first wife, however he said it was an accident.

Chelsea pretended to forgive her killer husband, who has also killed Tina Carter and Kush Kazemi, but she was on the phone to 999 and recorded his confession.

However when Chelsea dropped her phone, Gray picked it up and saw the phone call. Will he kill her?

Chelsea’s confrontation with Gray may be the last thing she does as Gray is unable to control his rage – will help arrive in time for Chelsea?

Meanwhile Mitch battles with the recent revelation that Gray killed Chantelle, but when he tries to tell Karen, she only wants to believe the best about her former son-in-law.

Can anything convince Karen that Gray is a killer?

Desperate for her moment of reckoning with Gray, Whitney tracks him down but what will happen when the two have their showdown?

With the truth about Gray’s dark past coming to light, police flooding the Square and numerous people wanting revenge, Gray realises his options are quickly running out…

But how far will he go to escape justice and will someone else take matters into their own hands?

Will you be watching tonight’s episode of EastEnders? Leave us a comment on our Facebook page @EntertainmentDailyFix and let us know what you think.