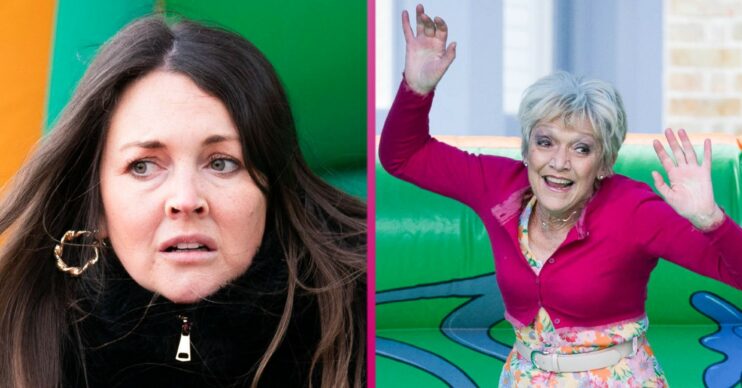 Stacey is concerned when Jean reveals she’s planning a surprise for the children.

She pressures Stacey to tell Arthur the truth about Kush’s death.

Later on the Square, Jean has blocked the market by purchasing a bouncy castle for all the kids leaving Martin concerned.

Stacey is mortified when she sees Jean on the bouncy castle. But when Jean accidentally hurts Arthur and embarrasses herself, Stacey tries to get her off.

Dana and Harvey return, disappointed that Aaron cancelled their visit.

Harvey sees Jean on the bouncy castle and joins her. Stacey is infuriated that he doesn’t truly understand Jean’s condition.

Stacey goes to desperate lengths to try and help her mum and bans her from being alone with the kids until she sees a doctor.

Read more: EastEnders SPOILERS: Will Bernie Taylor give up her baby as she makes shock return?

Soon Tommy arrives home expecting to get an earful for skiving school again, but he’s shocked to find Kat crying in the kitchen.

Janine tells Mick that they should have some space so she’s leaving for a while.

Mick feels like a fool when she rejects the flowers he bought her to say thank you for helping him.

She explains she wants what they have to be real and they need some time apart to be sure things are serious between them.

With Sharon going away with Albie, Jada tells Zack about a planned party for tomorrow, but he tells her she needs to cancel it.

Later Will goes to the salon asking for an invite. Jada is confused, however she soon realises her friends have sent out a massive invite on her behalf for a party at Sharon’s, despite her cancelling it.

Trying to make sure the house will be empty, Jada encourages Zack and Martin to go out tomorrow.

She’s relieved when they agree. But will the party end in disaster?