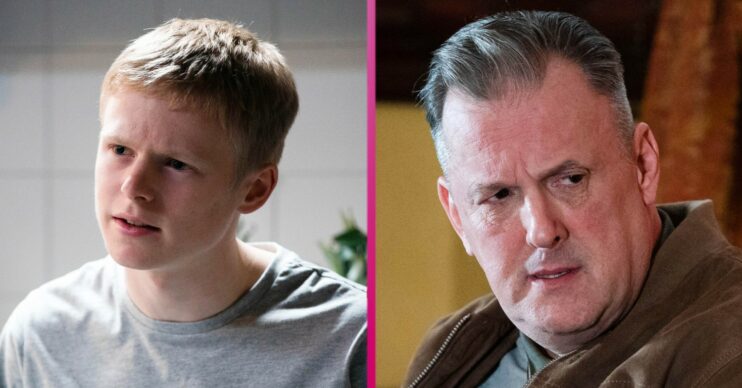 Bobby has a plan

Meanwhile Stacey backs into the path of an oncoming and Gray starts to question Chelsea.

Peter is shocked to hear about Aaron and warns Bobby to stay away from Dana.

Not listening to his brother’s advice, Bobby visits Kathy and asks to borrow money – he’s going to propose to Dana.

Kathy tells Peter about Bobby’s plan so he reveals what he knows.

Later Bobby gets down on one knee in front of Dana as Harvey watches on but soon a furious Kathy and Peter burst in – she can’t let her grandson marry into this family.

Stacey is brooding over the news that Martin was Lister’s first choice for the job.

Lily gives her a pep talk, however it’s mayhem over at the market.

Stacey tries to get some order but ends up with rubbish all over her.

Martin watches on amused but a fed up Stacey admits she hates the job.

Stacey is on a roll about how Martin has made her life hell as she backs into the path of an oncoming car.

Rainie is panicked as she continues her search for Stuart.

At Walford East Callum breaks down but Ben hesitates to comfort him as they are in public and Callum snaps at him.

Later Ben finally admits to Rainie and Callum that he encouraged Stuart to leave.

At the hospital, Gray questions Chelsea about Whitney coming to the house, but Dr Reuben interrupts to tell them Jordan is doing well thanks to Gray’s quick decision.

Later Gray questions Chelsea further about Whitney and she reiterates that she is focused only on Jordan now.

Denise checks on how they’re going and Chelsea tells her she can’t see Jordan.

Will you be watching tonight’s episode of EastEnders? Leave us a comment on our Facebook page @EntertainmentDailyFix and let us know what you think.