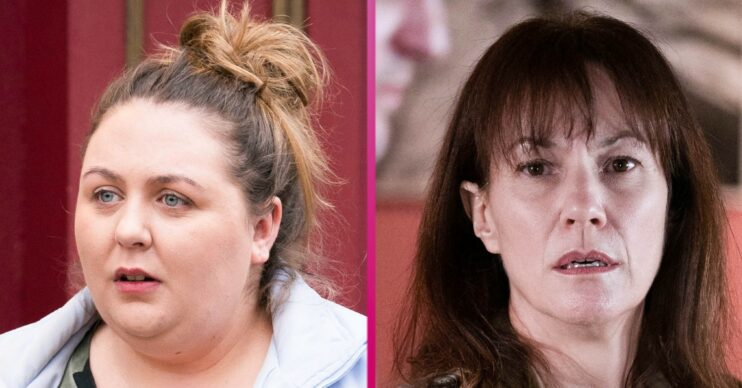 Bernadette prepares to give birth

EastEnders spoilers for tonight (Wednesday. March 30) reveal Bernie goes into labour, but will she decide to keep the baby.

Meanwhile Mack and Mia lock themselves away to avoid school and Scarlett’s social worker turns up to see Kat.

As Bernie goes into labour, a guilty Rainie lies to her and tells her Stuart is beating his cancer and is getting better.

At the hospital Rainie tries to keep everyone calm but Bernie is relieved when her um, Karen, arrives.

After seeing how much Rainie and Stuart already love and care for the little one, an emotional Bernie agrees to let them have the baby.

However when they’re alone, Rainie confesses to Bernie that Stuart has been refusing medical treatment.

She tells Bernie she can’t let them take the baby on a lie. What will Bernie do?

Chelsea steps in to help Mack and Mia?

Meanwhile Mack and Mia lock themselves in the house so they don’t have to go to school.

As Mitch tries to get them to come out, Callum tells him Bernie has gone into labour.

Mitch asks Chelsea to help as he needs to find Karen. She’s reluctant but eventually agrees and tries to talk to Mack and Mia.

Howie has a confession

Kim ropes Isaac, Lola and Patrick to watch her and Pearl’s preparation for the interview.

Howie later comes clean and admits he switched the video to show them Pearl’s real talents without all the extras.

Furious, Kim snaps at him and vents to her family.

When Isaac gets involved, Kim slips up and tells Lola and Isaac about Sheree.

Isaac says he’s going to Trinidad to look after her tomorrow.

Kat visits Phil in prison and breaks down. He does his best to support her but she’s clearly upset.

With Tommy suspended from school, Kat returns home furious, however she has more to worry about when Scarlett’s social worker turns up to talk about the final hearing.