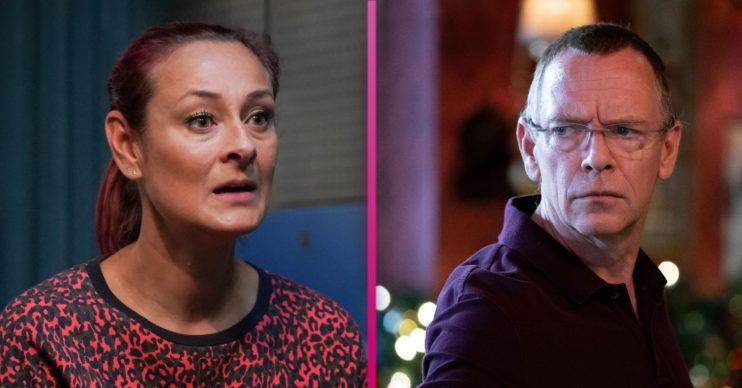 Tina is in the frame for Ian's attack

EastEnders spoilers reveal Tina Carter considers an escape plan in the week leading up to Christmas as she continues to find herself in the frame for Ian’s attack.

In next week’s episodes a loud bang goes off at The Queen Vic. Kathy and Sharon rush over fearing the worst.  But they soon find a petrified Ian cowering under the table.

Meanwhile Gray will tell Shirley that he thinks he has tracked down the delivery driver. Hopefully he will be able to give Tina an alibi.

Later the police arrive at Gray’s house. They need to account for Tina’s movements that morning and have more questions about Ian’s attack. Tina is terrified as she is taken down the station.

She is questioned further at the station, where she is shocked by what she’s told.

Tina is stunned that she is in the frame for Ian’s attack.

Soon DCI Arthur visits Sharon and Ian to let them know that they have taken Tina in for questioning. But another incident at home soon follows leaving Ian terrified.

Convinced Tina is behind it, Sharon and Ian soon storm over to Gray’s to confront her. However Tina vehemently denies being responsible. Will they believe her?

EastEnders: Tina to go on the run?

With evidence stacking up against her Shirley tells Tina she has to go on the run. Tina is terrified and rushes to see Mick.

She’s clearly completely distraught and Mick finally snaps into action to help her. Tina tells him that Shirley thinks she should leave Walford. Will Tina go?