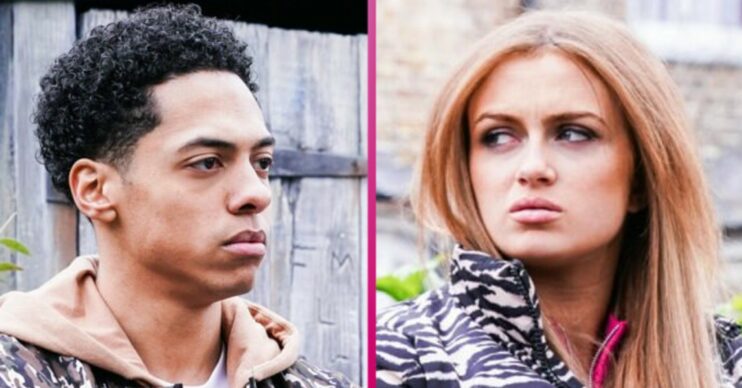 Maisie Smith is back for one episode

EastEnders spoilers for next week reveal icon Tiffany Butcher-Baker returns to the soap for one special episode.

With her ex-husband Keegan spiraling after discovering his sister was murdered by her husband, Tiff comes back to help him through his pain.

But with Keegan leaving Walford, will he go with Tiffany when she departs again?

EastEnders spoilers: Keegan out of control

Following the dramatic events of the previous week, in which Gray‘s abuse of Chantelle and subsequent murder spree were exposed, Keegan is a mess.

Understandably, the entire Taylor-Baker clan are beside themselves with grief and confusion.

But Keegan is taking it upon himself to be there for his family. He even plans a birthday party for young Mack, wanting to help the little lad get through this.

However, a chance remark by Vinny about Kheerat helping Chantelle makes Keegan feel incredibly guilty for not protecting his sister himself.

Even more determined than ever that he support his family in every way he can, Keegan takes over when Mitch can’t bring himself to explain to Mack and Mia what’s happened.

After Mitch and Karen row over failing Chantelle, Karen kicks Mitch out and Bailey begs Keegan to intervene.

But the pressure is getting too much for the sandwich seller and he can’t cope. Kat and Vinny try to make him see sense that he wasn’t to know what Gray was capable of, but Keegan is insistent he should have seen the warning signs his sister was being abused.

Storming around the Square with anger in his heart, Keegan ends up lashing out at Karen and they argue.

Keegan’s next move will shock everyone around him, but who can help him to cope?

Why does Tiffany return to EastEnders?

As Keegan faces the fact he could be in serious trouble for his actions, he is struggling to hold things together.

And that’s when Tiff comes back.

Keegs is floored, but grateful to see her.

As they sit in the Square and talk it over, will she be able to get through to him?

Things weren’t exactly left on good terms when she handed him a note before she left.

In fact she had written that she still loved him and wanted to give things another go, but her brother, Liam, had binned the letter and left a distraught Keegan with just his divorce papers.

Fans were annoyed and desperate for the pair to reunite – will they finally get their wish?

It was announced last month that Zack Morris has quit EastEnders as Keegan.

The soap released a statement from Zack on their Instragram account.

He said: “After five beautiful years on this incredible show, I have made the tough decision to leave Walford and give Keegan Butcher-Baker some well-earned rest.

“This show has quite frankly changed my life for the better. It will always hold a real loving place in my heart.

“The cast and crew of this show deserve every accolade that comes their way. The hard work, love and dedication that goes into making four episodes a week is immense and it’s not to be taken lightly.

“This show has given me so much, not just as an actor but as a man. These invaluable lessons I have learned at EastEnders will stay with me for the rest of my life.

“I will forever see this whole experience as the biggest blessing I could have ever asked for. I loved every second.”

Meanwhile, Kate Oates, Head of Continuing Drama, BBC Studios added: “Zack has been an incredible asset to EastEnders; not just as a brilliant actor, but as an amazing company member.

“As a founder member of the Taylor-Bakers, Zack has shone in important narratives such as the knife crime story; he’s broken hearts with his beautiful relationship with Tiffany Butcher; and is soon to take centre stage again as his sister’s killer is unmasked.

We will miss Keegan from our screens, and Zack from our Elstree family. He’s a great talent, and we wish him well for the future.”

When does he go?

Tiffany’s return was revealed a week later and it was said she would be involved in Keegan’s exit.

Will he leave with her and start afresh in Germany, where she now lives?

Or will she just make him see there is life away from Walford and encourage him to live his dreams without her?

These two deserve a happy ending!