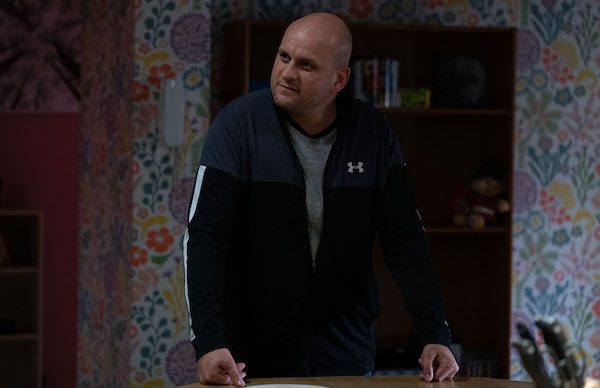 Stuart is left seething when his dad Jonno turns up in Walford in tonight’s episode of EastEnders (October 1 2019).

In a preview clip shared on EastEnders’ official Twitter page, Stuart and Rainie are in their apartment talking about celebrities they could see Callum having a crush on.

But their conversation is soon interrupted when the door buzzes.

As he picks up the phone, Stuart immediately looks furious.

When Rainie asks who it is, Stuart responds telling her it’s someone he doesn’t want to see.

But when she questions why he’s letting the mystery person in, Stuart says he wants to find out why he didn’t get the message last time.

Soon Stuart’s dad Jonno comes round the corner and tries to act friendly with his son.

However, Stuart is having none of it and tells him to leave. But it looks like he sticks around for a bit longer.

Read More: EastEnders SPOILERS: Martin in danger as he returns?

Later he sees his other son Callum on the Square and things soon escalate between the pair.

Jonno wants to know why the wedding was cancelled.

As people try to cover for Callum, will he tell his dad that he’s gay?

Things soon get out of hand and it’s Phil Mitchell that steps in to help Callum.

He swoops in and punches Jonno issuing him with a stern warning.

Viewers will remember Jonno first made an appearance a couple of months ago after Whitney wanted to invite him to the wedding.

During his short stay, viewers saw him make homophobic remarks in front of Ben and Phil Mitchell and make fun of Callum in front of then-fiancée, Whitney.

Eventually Stuart threatened to kill his dad if he didn’t leave and he left the Square on pretty bad terms.