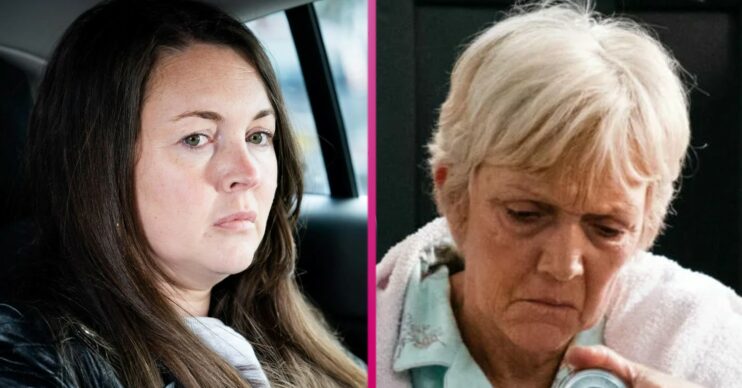 Is she putting Jean in danger?

EastEnders spoilers for next week reveal Stacey is forced to take desperate action over Jean – but is she putting her mum in danger?

With Jean in hospital following her manic episode, Stacey is finding it tough.

When she visits her mum she makes a split second decision to bring her home to Walford, but is it really the right thing to do?

Why is Jean in hospital?

Stacey was forced to section Jean after her mum nearly drowned in a wedding dress in Southend.

In powerful scenes Stacey rescued her mum from the water as Jean admitted she knew she was ill, but she wanted to be with the late Daniel.

Stacey’s visits to Jean haven’t been going well. Jean has begged to go home and Stace has been left concerned by behaviour of the other patients.

So far, the food truck owner has remained firm that the hospital is the best place for her mum. Next week, however, that all changes…

Stacey has troubles at home as Lily blames her for Jean being in hospital and a row breaks out.

Already feeling guilty after Lily’s outburst, Stacey then goes to visit her mum and her concerns grow.

Stacey witnesses an incident between Jean and another patient and realises Jean is not safe in hospital.

Wanting to do what’s best for her mum, Stacey brings her home. But is this really what Jean needs?

Kat and Eve are worried when they find out Jean is back home. They share their concerns with Stacey, but she’s adamant it’s the right thing.

Harvey isn’t keen to see Jean, however, and makes an excuse not to pop over. His behaviour leaves Stacey disappointed, not least because Jean isn’t interacting with the kids or eating anything.

As Stacey faces up to the challenges ahead of her, has she really made the right decision?

Stacey continues to struggle and when the mental health nurse arrives, will Stacey confess she’s made the wrong choice?

Is Jean in more danger being at home than she was in hospital?

Read more: EastEnders spoilers for next week in all-new pics