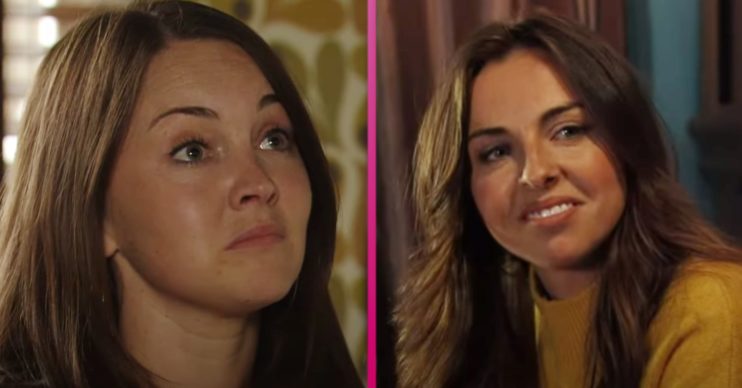 Stacey recently returned to Albert Square after a year away

EastEnders spoilers reveal Stacey gets some shock news next week.

Stacey recently returned to Albert Square and it was revealed she had been stealing Ruby’s money as payback for Ruby dating her ex-husband, Martin.

Although Ruby told Stacey she would allow her to pay her pack instead of going to the police, it seems Stacey still wants to mess with her former best friend.

In upcoming scenes, Jean and Kat see a photo of Ruby and Martin on social media that shocks them.

They desperately try to keep the news from Stacey. But when Martin and Ruby arrive back on the Square, Stacey approaches Martin.

She quickly finds out the truth. What is the news?

Later in the week it’s Hope’s birthday and Martin and Ruby pop round to drop off presents.

Ruby smugly invites Stacey to her club that evening for a party. Stacey and Kat decide to go but only to steal expensive booze.

Stacey finds the stash in Ruby’s office but as she’s grabbing it, Ruby and Martin enter for some pre-party action.

Stacey hides under the desk as things start to heat up between the couple. How will she get out of this one?

She struggles to come up with an excuse as to why she was hiding in the office to Martin and Ruby. Instead of lashing out, Ruby smugly invites her to join the party.

But tensions quickly rise between the two women and Martin is forced to step in.

Martin and Stacey split up last year as Martin was trying to protect her and the kids from Ben Mitchell.

He ended up sleeping with her best friend Ruby and it appears the two officially got together in lockdown.

Are Martin and Stacey really over for good?