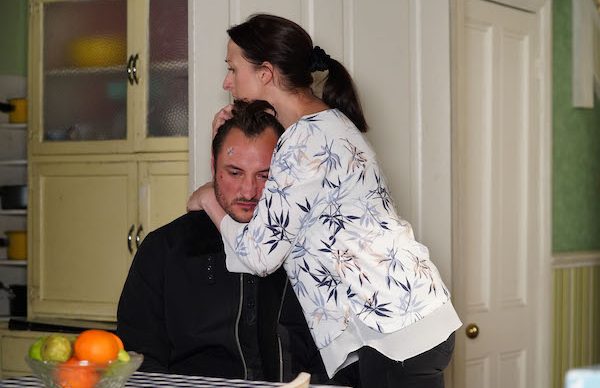 EastEnders SPOILERS: Sonia does the unthinkable for Martin

She's desperate to protect her man

Sonia Fowler goes above and beyond for Martin Fowler in next week’s EastEnders after he finds himself in huge trouble as his hit and run nightmare comes back to haunt him.

EastEnders fans will remember that just before Christmas Martin and his dodgy-dealing sidekick, Tubbs, accidentally hit someone while driving home from an illegal job.

But while Martin wanted to stop and help the person they’d hit, Tubbs persuaded him not to – leading to Martin being haunted by what had happened.

However, nurse Sonia did some digging at work and found out that the man that they’d hit, George, was still alive, leaving Martin relieved.

When Martin gets some good news next week that George is awake, his relief is set to turn to horror when Sonia goes to visit him while at work at the hospital and is shocked by what she finds.

Sonia is left shaken after speaking to George, but covers what she has discovered by keeping the news from Martin.

Desperate to protect Martin after what he has been through, Sonia lies to him about her conversation with George, and it is only when she goes to see the patient again that she is left more worried than ever before.

It turns out George has done some digging of his own and is making a huge demand on Sonia, leaving her rattled and unsure about what to do.

At home Martin and Sonia are enjoying keeping their relationship a secret, but Martin is oblivious to the turmoil that Sonia is going through for him and, as George continues to pile the pressure on her, Sonia ends up doing something unthinkable to protect Martin.

Sonia thinks she has dealt with the George drama and tries to look forward, excited about spending time with Martin.

And when Kush finds out that Martin and Sonia are back together, he is thrilled for the pair and they all celebrate.

However, when Martin and Sonia get home from their drinks, things take a sinister turn when Martin discovers he has got a letter waiting for him… and the contents are set to leave him rocked.

But what has Sonia done to protect Martin?

What do you think Sonia has done? Leave us a comment on our Facebook page @EntertainmentDailyFix and let us know what you think!