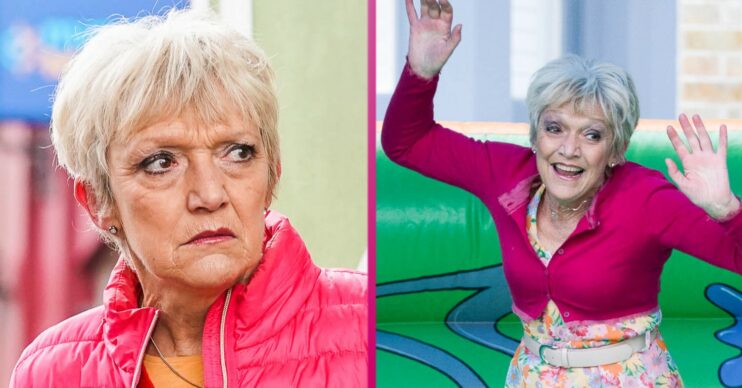 EastEnders spoilers for next week reveal Stacey is concerned Jean is having a manic episode.

She bans her from seeing the children but soon Jean is making plans to leave London.

Will Stacey be able to convince Harvey to get her mum the help she needs?

Stacey grows increasingly concerned about Jean as she reveals she’s planning a surprise for the children.

Jean puts pressure on Stacey to tell Arthur about what really happened to Kush.

Later, outside on the Square Jean has blocked the market by purchasing a bouncy castle for all the kids, leaving Martin concerned.

Stacey is mortified when she sees Jean on the bouncy castle. She attempts to get Jean off it when Jean ends up hurting Arthur and embarrasses herself.

Soon Dana and Harvey return to the Square after their visit with Aaron is cancelled, but Stacey is furious by Harvey’s reaction to her mum’s behaviour.

Later Stacey goes to desperate lengths to try and help her mum. She bans Jean from being alone with the kids until she goes to a doctor.

It’s not long before Jean confronts Kat over Stacey’s decision and tries to convince her she’s more than capable of looking after the children.

Later Jean manages to get out of the house with Arthur and takes him to the tube station. At the station she tells him what happened to Kush.

When they realise Jean and Arthur are gone, Stacey and Martin work together to look for them.

Eventually Stacey finds them, but she’s upset when she discovers Jean told Arthur about Kush’s murder.

The mother and daughter argue and soon Jean turns up at Harvey’s flat. She announces she’s moving in with him and Stacey is dead to her.

The next day, Stacey goes to see Harvey and tries to explain how Jean’s current behaviour is evidence that she’s experiencing a manic episode.

After Harvey visits Aaron, he suggests to Jean that they get out of London.

But Jean insists they leave now and don’t wait to go.

Will Stacey find out and will she be able to convince her to stay?