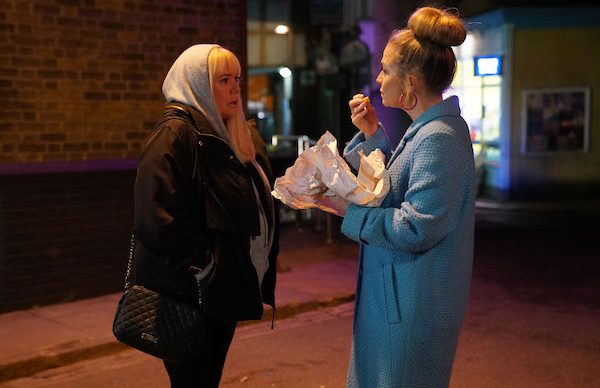 Linda is about to drop a bombshell on Sharon...

Sharon Mitchell is set to have her world turned upside down in next week’s EastEnders when Linda Carter reveals what really happened to Keanu Taylor at Christmas.

Keanu’s fate is quickly becoming one of the worst kept secrets in Walford at the moment.

Not only did Martin Fowler tell Karen Taylor that her son was alive and well just days after he lied to the Mitchells that he’d done their dirty work and bumped Keanu off, but next week sees Sharon discover the truth too.

How much longer will it be before Phil, Ben and Louise realise that Martin only did half a job?

Next week’s EastEnders sees Linda’s drinking continue to spiral out of control, with her even forgetting her own husband’s birthday.

Mortified, Linda quickly organises a surprise party for Mick, but it is clear that she’s struggling to keep away from the booze as everyone celebrates.

Later in the evening while Mick is behind the bar, Linda is supposed to be upstairs looking after Ollie.

But instead she is drinking once again and does the unthinkable when she leaves Ollie alone and heads out to the Prince Albert looking for more alcohol.

En route to the bar she bumps into former best friend Sharon, who she has been estranged from since kicking her out at Christmas while drunk.

The pair finally make amends and pregnant Sharon confides in Linda about how scared she is that Keanu could be dead thanks to the Mitchells.

But after one too many vodkas, Linda drunkenly reveals to Sharon that Keanu is alive and well, leaving Sharon stunned… and also totally confused about how Linda would know.

The next day Linda is mortified when Mick reveals she left Ollie alone to go drinking, but soon her own parenting skills are the least of her worries when she is cornered by Sharon.

Sharon wants details of what happened at Christmas, but Linda tries denying all knowledge of their conversation the night before.

However, Sharon wasn’t born yesterday and tells her friend that if she doesnt spill the beans then she is going to talk to Martin.

Eventually Linda reveals the truth and finally Sharon has some dirt on the Mitchells that she can use against them.

As Sharon uses her upper hand to her advantage, the Mitchells are thrown into a panic when past events come back to haunt them… but just how far will Sharon go for revenge?

And will she leave Linda and Martin in danger as she plots against the Mitchells?

How much longer do you think it will be before Phil finds out Keanu us alive? Leave us a comment on our Facebook page @EntertainmentDailyFix and let us know what you think!