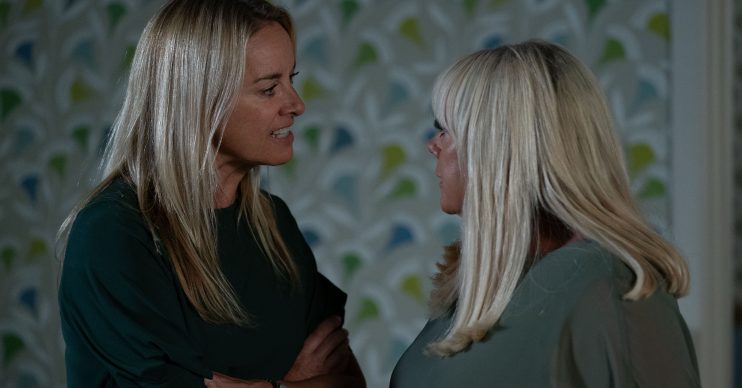 EastEnders SPOILERS: Sharon under pressure as Mel ups her demands

Sharon's in a no-win situation

Sharon Mitchell should have known she was never going to keep the paternity of her baby a secret in EastEnders.

Now that Mel Owen knows, Sharon faces increasing pressure to do as Mel says or deal with the consequences of her affair with Keanu Taylor being revealed.

Sharon thought she’d got Mel off her back earlier this week, but it turns out Mel isn’t done with her yet…

The mum-to-be has already engineered it so Louise and Keanu move back in with Lisa by pretending to Keanu she couldn’t live under the same roof as him.

Sharon thought that was it and Mel would let it go after she acted out her orders, but she was very wrong.

Mel insisted she would be in touch and there was more that she wanted.

Lisa is suspisious of what’s going on and questions her friend, but Mel stays quiet and refuses to reveal anything.

However, Sharon isn’t just a Mitchell in name – she’s picked up a few tricks herself over the years and manages to find a way to get the upper hand over Mel.

The grieving mother goes on to change her demands leaving Sharon reeling.

Coming face to face, Sharon is totally shaken and knows she has to act fast to avoid Phil finding out he’s not the baby’s daddy.

What will Sharon do next? And who will come out on top?

Mel declared revenge on the Mitchells after her son, Hunter Owen, was shot dead by police.

Hunter had escaped from prison and taken hostages in The Vic with a view to killing Jack Branning.

Determined to get vengeance for her son, Mel will go to any lengths to punish the Mitchells.

Will Sharon end up the victim of Mel’s twisted vendetta?