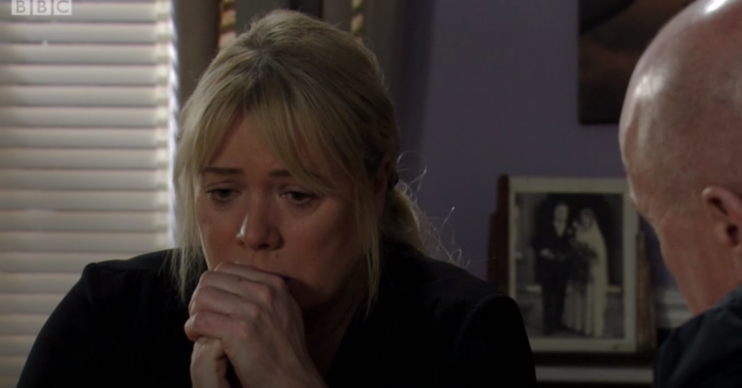 Grieving mum Sharon struggled to cope with her newborn baby after the death of her eldest son Dennis on the same day.

Having lost all hope, she handed Kayden over to his paternal grandmother Karen Taylor and fled to Australia.

But tonight she makes a surprise return to the Square.

Confiding in pal Linda she admits she wants to give her marriage another go – and own the Vic again.

Linda gives her her blessing to buy the pub – and to get back with Phil.

But as the Mitchells celebrate their good news, Sharon spots Karen in the pub and reminded of her baby – becomes overwhelmed.

Later Sharon’s plunged back into grief when she finds some of Dennis’ belongings while packing with Linda.

And it has unexpected consequences.

It becomes clear that Sharon is questioning her decision to give up her baby.

Wondering if it is the right thing to do she speaks to Karen again – but is she having second thoughts really?

Will Karen leave Walford with Kayden?

Actress Lorraine Stanley said she didn’t think Karen could understand Sharon’s decision to give up Kayden.

She said: “I don’t think Karen can quite get her head around it because Karen is such a maternal mum, I just don’t think she’d even do that as a mother.

“In a way she’s doing a similar thing but her kids are grown up so it’s different.

“So I think she’s got mixed feelings really. She understands what Sharon’s going through but I don’t think it would be something she’d ever do herself.”

She added: “Obviously as a mother she doesn’t want to leave her children but she feels that she’s doing the right thing for Kayden, she couldn’t bare him to go into care so it’s her only option.

“I think she’s really bonded with him, being that age as well, she has really strong feeling for her little grandson.”

EastEnders airs these scenes tonight at 8.40pm on BBC One.

Do you think Sharon should give up baby Kayden? Leave us a comment on our Facebook page @EntertainmentDailyFix and let us know what you think!