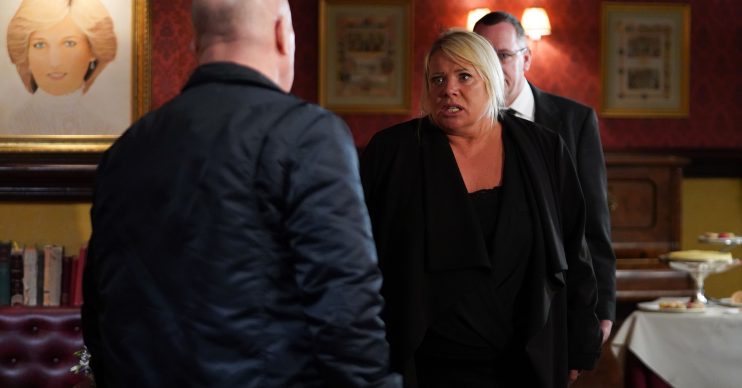 Phil hasn't been seen since February when he caused the crash

EastEnders has revealed the first look at Sharon Mitchell attacking ex husband Phil on his return.

In tonight’s episode of the soap Phil makes a shock return as Sharon prepares to bury her son Denny.

Viewers know Phil caused the boat to crash so is partially responsible for the boy’s death.

Furious at the sight of Phil, Sharon struggles to remain calm.

She blames him for Dennis’s death and she lashes out forcing Ian to step in.

The last time fans saw Phil he was back on the banks of the Thames as paramedics fought to save Denny’s life following the party boat disaster.

But having caused the boat accident as he fought to get revenge on Keanu for his affair with Sharon, Phil fled the scene.

He knew that he holds responsibility for Denny’s death – a teenager he thought of as a son.

Next week sees a devastated Sharon say a final goodbye to her beloved son, Denny, as the day of his funeral arrives.

But after banning all Mitchells from the service, she is left shocked when Phil arrives at the wake.

Sharon is fuming that Phil has got the audacity to turn up at the funeral and launches herself at him.

It is left to Ian and Kathy to intervene before things get too ugly.

Phil is at breaking point himself

However, Phil’s clearly not one to take no for an answer because he is soon kicking Ian’s door down to get to Sharon in true Mitchell style.

But before Phil has much of a chance to speak to his estranged wife, Ian calls the police.

Phil scarpers before they arrive.

Clearly Phil is a man with something on his mind when he’s back.

Later he nurses a drink at home, and it is left up to Jay to try and stop him from putting his life at risk and drinking.

As the police arrive once again, Phil is forced to hide.

However, it doesn’t take Sharon long to later track him down at the Arches and soon Phil makes a huge decision about his future.

What do you think Phil will do? Leave us a comment on our Facebook page @EntertainmentDailyFix and let us know what you think!