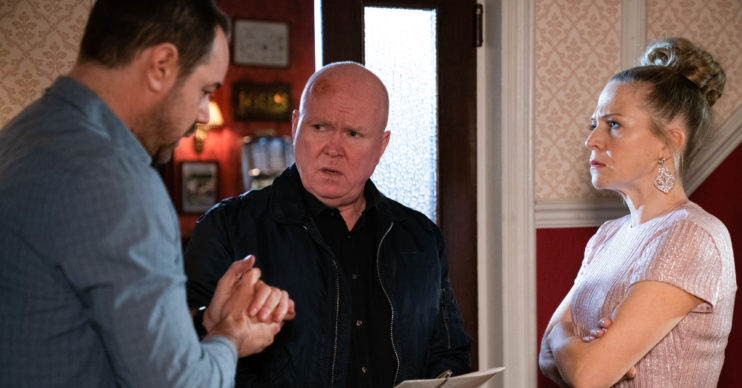 EastEnders SPOILERS: New owner of the Queen Vic will be revealed before soap ends

Who will get their hands on the Queen Vic?

In Tuesday night’s EastEnders (June 16) the new owner of The Queen Vic will be revealed.

In tonight’s EastEnders (Monday, June 15), viewers saw that Linda wasn’t too keen to sell the pub after hearing how Phil had been treating Sharon.

But in tomorrow’s episode, which is the last one before the soap goes off air, Phil pressures Mick to sign the paperwork to finalise the contract.

However Linda stands her ground, not wanting Phil to get her hands on the business.

Later, Mick asks for Sharon’s help convincing his wife to sell to Phil as he’s worried about her drinking and wants to get her out of there.

Sharon agrees that Linda needs to get out of the pub and takes matters into her own hands.

It’s the ultimate stand-off, but will Phil get his way this time? Who will be the new owner of The Vic?

The final episode before going off air

This will be the final episode before the soap goes off air.

However, EastEnders fans will still be able to get their fix. As of next week (Monday, June 22) EastEnders: Secrets From The Square will begin airing. The show will start at 8pm on BBC One.

The new series will be hosted by Stacey Dooley. Each week, two cast members will look back on their time on their show and reveal behind the scenes secrets.

Read More: EastEnders’ fans furious there is no trailer for final episodes

On Tuesday nights, viewers will get a chance to reminisce and relive unforgettable moments from the show.

A selection of iconic episodes will be reshown including Den and Angie’s two-hander, Sharongate and Max and Stacey’s affair reveal.