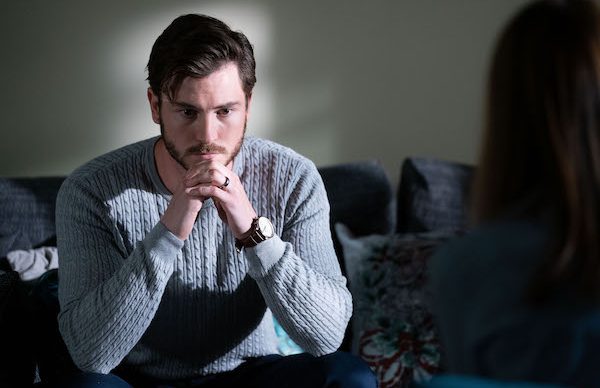 EastEnders SPOILERS: Mitch finds out the truth about Gray

The walls are closing in on Gray

Next week’s EastEnders sees Mitch Baker do some digging, and he’s shocked when he unearths some surprise truths about his son-in-law, Gray Atkins.

Gray has found himself in hot water at work ever since agreeing to take on Whitney Dean’s case and try and prove to a jury that she killed Leo King in self defence.

With the evidence stacking up against Whitney and the lies behind what happened that night all taking their toll, things don’t look good for the terrified stall holder, and everyone knows it.

But no one understands how much trouble Whitney is in more than Gray, who has been working his fingers to the bone trying to prove her innocence, while then taking his work stress out on his long-suffering wife, Chantelle.

EastEnders fans know that Gray has been subjecting Chantelle to horrendous domestic abuse behind the closed doors of what looks like a perfect life, and no one has any idea what Gray is capable of.

But next week sees Chantelle’s dad, Mitch, closing in on the truth as he works out that Gray has lost his job.

The drama starts when Gray’s office return his belongings following his suspension, and despite Chantelle offering her husband her support, he lashes out at her and tells her not to mention to her parents that he is now out of work.

Chantelle realises that Gray isn’t in a good place and, knowing what that usually means, she asks Karen to babysit in a desperate bid to get her kids out of the house when Gray gets home, and out of potential danger.

Once home, Gray learns that his firm have dropped Whitney’s case and he is livid, and announces that he is going to represent her without his firm’s backing… but is this a good idea?

Things get worse for Chantelle when Denise drops the bombshell that she isn’t going to need her full-time at the salon any more, and with Gray out of work, Chantelle realises she is going to have to look for a new job.

However, finding a job is soon the least of her worries, because Mitch has worked out that Gray is hiding something and has started digging up dirt on his son-in-law.

When Mitch hears Jack Branning talking about seeing Gray going into a hotel, he is immediately suspicious and thinks that he is having an affair.

But when he quizzes Gray, he only makes matters worse because at home Gray takes his anger towards Mitch out on Chantelle, who tries to calm him down.

Mitch is like a dog with a bone and won’t let his suspicions slide, and soon he goes to Gray’s work, only to find he has been suspended.

Mitch is stunned to unearth such a huge secret about his daughter’s husband, and tracks him down.

But when Mitch offers Gray money while he is out of work, proud Gray is left seething, and it seems that Mitch has just inadvertently made things a million times worse for his daughter.

At home Gray explodes at Chantelle, thinking that she has told her dad about his work when he asked her not to… but when Karen, Bernadette, and Tiffany discover the news that Gray is out of work but still representing Whitney, they all summon him to the pub.

Leaving a terrified Chantelle at home following his attack, everyone cheers Gray’s arrival.

But Gray goes cold when he discovers Mitch worked out the truth about his job on his own and Chantelle had kept to her promise of not telling anyone.

But will Chantelle be okay? And how much more digging will Mitch have to do before he finds out what Gray is really hiding?

Are you looking forward to when Gray’s abuse is finally uncovered? Leave us a comment on our Facebook page @EntertainmentDailyFix and let us know what you think!