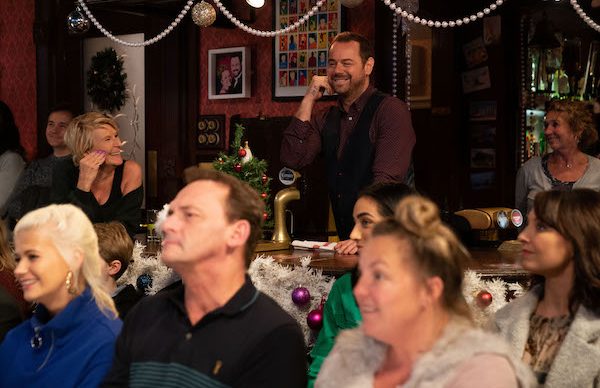 Will it all run smoothly?

There’s trouble heading to The Vic in next week’s EastEnders when Linda’s drinking gets embarrassing at Mick’s alternative nativity.

With Linda’s drinking spiralling out of control by the day, Mick is at a loss over how to help his wife.

But next week he tries to put a smile on everyone’s faces when he organises a nativity for all the children of Albert Square.

When Ollie doesn’t get a main part in his school nativity, Mick is left feeling this is just another kick in the teeth because of his son’s autism.

However, Mick isn’t going to let the school drama get in his way, and he organises a nativity of his own – one that Ollie can take centre stage in.

But when the pub landlord discusses the idea with Linda, Tina, Ian, Mitch and Gray, he realises that it will be harder than they thought – especially as they don’t have any ideas.

However, little Bailey comes to their rescue when it is revealed that she has taken part in a Christmas writing competition and she agrees to let the grown ups use her story. But she has got demands!

Later Gray issues Mick and Mitch with a contract, and it’s all systems go as everyone starts rehearsing their roles.

But Mick’s happiness doesn’t last for long when he invites the mums from Ollie’s school and they all decline. But why won’t they get involved?

As the nativity night arrives, the parents of Albert Square are thrilled when they see their little ones on the stage, and the children manage to make the show a roaring success.

But while Mick is enjoying the evening, he is upset to see Linda in the front row, drinking once again.

Realising he needs to get advice, Mick confides in Sharon about Linda’s drinking and she promises to look out for her friend.

But when Sharon makes a friendly suggestion to Linda that she should spend more time with her husband, Linda brushes off her concerns and Sharon’s words fall on deaf ears.

Later Linda drunkenly congratulates Mick on his nativity success, but it is clear he is worried about her.

Will he manage to find a way to help his wife?

Do you think Mick can help Linda out of her downward spiral? Leave us a comment on our Facebook page @EntertainmentDailyFix and let us know what you think!