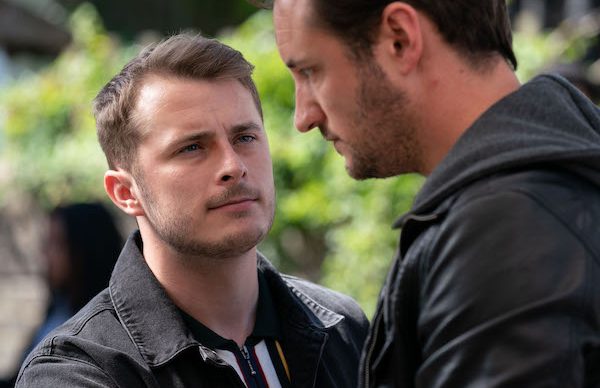 There’s trouble heading for Martin Fowler in next week’s EastEnders when his feud with Ben Mitchell takes another sinister turn.

After Sonia is forced to give Martin a false alibi when the police come looking for him, she starts to realise that he has got himself into trouble and quizzes him about what’s going on.

But while EastEnders fans know he is in a whole world of drama with Ben Mitchell as he continues to protect wife Stacey from her crimes against Phil Mitchell, Sonia is completely in the dark about his actions.

As next week arrives Ben’s grip on Martin shows no sign of letting up, and Martin is still at Ben’s beck and call if he wants to keep the wrench Stacey used to attack Phil away from the police station.

But when Ben sends Martin on another collection job, Martin is adamant that he doesn’t need any back up, and would rather go alone.

However, things only get worse for the struggling dad when Ian asks for the takings from the market stall and Martin is forced to hand over a measly amount of cash.

With fruit and veg not being at the forefront of his mind at the moment, Martin tries to cover up for the fact the takings aren’t what Ian expected.

But as much as he tries to hide what he has really been up to, it’s clear Ian is suspicious that Martin is hiding something.

Sonia’s worry also deepens when Martin later misses Bex’s next mental health appointment because a pick-up job with Tubbs spirals out of control.

But letting his daughter down isn’t Martin’s only regret. He is also caught up in trouble as the job with Tubbs takes a sinister turn and he ends up being badly beaten.

Sonia is shocked at the state of Martin and, as soon as she sees his injuries, she demands he goes to A&E.

But of course Martin refuses, knowing that the doctors would start to ask questions that he couldn’t answer.

However, as the jobs for Ben start to get more and more dangerous, is Martin going to find himself in serious trouble as he’s drawn into a world that he’s not made for?

With Ben’s grip on Martin continuing, it doesn’t seem like he is going to go back to being the loveable market stall holder we know and love any time soon.

Could this new side to Martin be here to stay? And what dark path will Ben lead him down?

Do you think Martin is going to turn nasty? Leave us a comment on our Facebook page @EntertainmentDailyFix and let us know what you think!