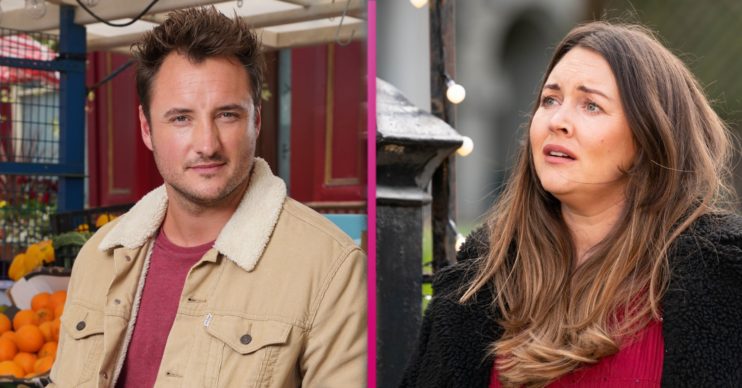 But are they getting back together?

EastEnders spoilers reveal Stacey kisses Martin on Christmas Day. But will it end in a reunion for the two?

In the upcoming scenes Stacey receives her present from Martin and she is surprised by what he got her. But Martin pales when he realises his blunder.

Meanwhile Ruby is waiting at home with a surprise table full of food for Martin but he’s not answering his phone.

Later the Slaters are involved in a raucous family game when Ruby arrives and she agrees to stay. Soon Jean suggests they all go to the pub.

Later Martin and Stacey leave The Vic together. She’s encouraged by his thoughtful gift and takes a chance on love.

Stacey moves in and kisses Martin. How will he react? Could this lead to a reunion for the former couple?

Stacey and Martin split up last year as he was trying to protect his wife from Ben Mitchell.

He told Stacey he slept with his ex-wife Sonia. But when Ben agreed Stacey could return, she didn’t want to come back.

Over lockdown Martin began a romance with Stacey’s former best friend Ruby. But it was revealed Stacey had been stealing Ruby’s money as revenge for taking her husband.

Shortly after Stacey returned to Walford in September, it was reported in The Daily Star Sunday that actress Lacey Turner would be taking another extended break from the show.

Lacey later announced that she is pregnant with her second child. In July 2019 Lacey and husband Matt Kay welcomed their first child, a daughter named Dusty.